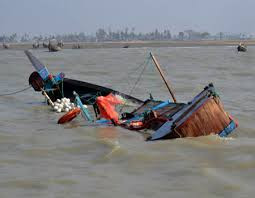 One person has been declared missing after a speed boat conveying roofing materials capsized at the Ibasa waterfront in Lagos yesterday June 15th.

A statement from the Lagos state police command says at about 12.00noon, a speed Boat with inscription ‘OMOMUMMY MARINE’ mounted with 70HP Yamaha engine, operated by one Muri Jimoh, with two passengers on board, capsized  at Ibasa waterfront due to heavy wave, while conveying roofing materials from Ijegun to Ibasa.

Consequently, the victims overboarded and got drowned.

However, two of the victims were rescued alive by a team of Marine Policemen patrolling the waterways.

One of the victims, a 32-year-old man identified as Rasaki is still missing. Search and rescue operation is still ongoing to rescue him alive.