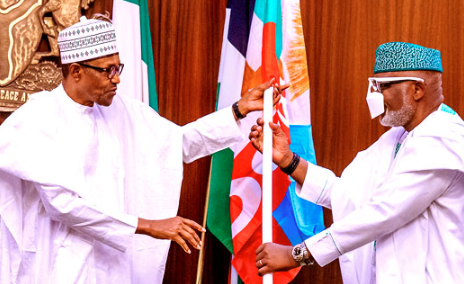 PRESIDENT Muhammadu Buhari has tasked the leadership of the All Progressives Congress (APC) as well as the party’s campaign committee for Ondo State governorship election to ensure that the party retains the state in the upcoming poll.

President Buhari gave the task on Friday when the party and its campaign council for the Ondo governorship election approached him with the candidate and governor of the state, Arakunrin Rotimi Akeredolu, at the State House.

The entourage that visited the President also included the Chairman of the APC Campaign Committee for the Ondo State governorship election, Governor Babajide Sanwo-Olu of Lagos State; the governor of Plateau State, Mr Simon Lalong; the Kebbi State governor, Alhaji Atiku Bagudu and the deputy governorship candidate of the party, Mr Lucky Aiyedatiwa.

Buni expressed confidence that the ruling party would carry the day in the Ondo election, asserting that only APC could win the state as the candidate had proven to be an excellent administrator in his first term as governor.

“APC is the only party that can win election in Ondo, not only because APC as a party is the only party but because the governor there is performing and has performed. The people of Ondo state have seen it themselves and have agreed that he is the only man they can trust for the next four years.

“So, Mr. President has endorsed him. That is what we have been looking for: his blessing, his endorsement, his encouragement and his support, and we have got that already.

“We are here today to present our candidate to Mr. President, being the leader of the party, for his blessing. That has always been the practice. We cannot kick-start our campaign without his endorsement and that is what we have just done.

“Well, I am optimistic because the product we are selling has sold himself already; because he has performed in the last four years. We are all products of our choices and the people of Ondo State are wise now to choose him to continue the good work he is doing.

Also speaking, the Chairman of the campaign committee, Governor Sanwo-Olu, said although the party is confident of its chances of returning Akeredolu as governor because of his development strides, the campaign would not take the people for granted, and would reach out to everyone nook and cranny of the state.

“When you have a good product and people have seen and have agreed, it makes our job easier.

“Our good friend and brother, Governor Rotimi Akeredolu, has not only done well, he is a progressive and he is a man that has stood over the last four years, carrying his people along and doing all to ensure that good governance continues in Ondo State.

“So for us, it is really about ensuring that we do not take anybody for granted. That is why we are not going to rest on our oars even when we know that he has done very well. We will still go through the entire gamut of campaigning, ensuring that we go into all the nooks and crannies of the state to reassure them that their governor, our candidate, will continue on the good job that he is doing, and also solicit for their votes to ensure that they come out en masse and vote to re-elect him.

“So we will be starting our campaign tomorrow (today) by the grace of God, and we will ensure that he goes round all the senatorial districts, local governments and wards in the state so that we do not take anybody for granted and continue to ensure that the good work that he is doing, they can see it and they can continue to work with him,” Sawo-Olu said.

Meanwhile, the candidate of the party, Governor Akeredolu, said President Buhari had given the party the task to go out and ensure victory, adding that the party would not take the task for granted.

He said: “All of us, we are not taking things for granted, and we know that by the grace of the Almighty God, success is ours.

“When we got to the President, like the Chairman said, we received his blessings. He spoke to us, he encouraged us to move on and do our best and make sure that we win Ondo State for APC.”

On what he would do differently if re-elected, Akeredolu said: “I have a lot of projects that are not completed.

“We have had problems in the past; that a governor starts a project and somebody comes in and abandons it. I am appealing to the people of Ondo State, let us see these projects to fruition.

“Port Ondo is a new thing entirely for us. The bitumen exploration is a totally new thing. Bitumen has been there for years, today we have to extract bitumen… and the federal government has said we won’t be importing bitumen at a point in time.

“So, we need to be there to steer the affairs of state to ensure that bitumen comes on board from Ondo State. That is where you have the largest deposit of bitumen, second largest in the world, and these are things we are convinced we have to do, and that is why we talk to our people that continuity matters so that somebody will not come to truncate all these advancement that we have made getting to port, to bitumen exploration and so many other things.

“So I have a lot to do differently.”

Ahead of today’s flag-off of the ruling party’s Ondo State governorship campaign, the Governor Babajide Sanwo-Olu National Campaign Council yesterday announced five sub-committees for the actualisation of victory for the party’s flag bearer in the October 10 governorship election in the state.

The sub-committees are Contact and Mobilization, Election Management, Security, Finance and Media, and Publicity.

For the Security Committee, the 31-member sub-committee will be chaired by the Governor of Kogi State, Yahaya Bello, with his Lagos State counterpart, Babajide Sanwo-Olu and Governor Babagana Zulum of Borno State as co-chairmen.

The Finance Sub-Committee, which has 31 members, is led by the National Campaign Council Chairman and Lagos State Governor, Babajide Sanwo-Olu while Plateau State Governor Simon Lalong and his Jigawa State counterpart Muhammadu Badaru Abubakar are co-chairmen.

In the 56-member Media and Publicity Committee, Governor Dapo Abiodun of Ogun State and his Kaduna State counterpart, Governor Nasir El-Rufai, are to serve as co-chairmen. The committee also has the daughter of Kano State governor, Fatima Ganduje Ajimobi, as a member.

The Chairman Caretaker/Extra-Ordinary National Convention Planning Committee (CENCPC) of the party, Governor Mai Mala Buni, had directed the Ondo State Governorship National Campaign Council to devise means of ensuring that the party retains the state after the October 10 election.

Akala to Makinde: don’t address your predecessors as charlatans