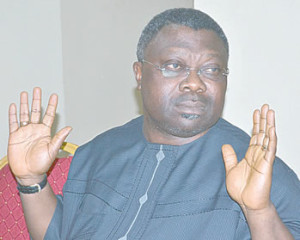 In the aftermath of the March 25 congress of the Peoples Democratic Party (PDP) in Osun State, in which Mr Soji Adangunodo emerged as the substantive Chairman of the party in the state, a former Deputy Governor and chieftain of the party, Iyiola Omisore is set dump the party.

It’s  been gathered from the former lawmaker’s camp that the former member of the National Assembly is consulting widely on the alternative political platform he could realise his age-long gubernatorial ambition.

A credible source from his camp told our reporter that the body language of the National body of the party does not favour Omisore, the fact that played out in the newly concluded congress of the party, where Omisore’s faction” was utterly ignored.”

“As it is, it is crystal clear to everybody that the National Secretariat has pitched it’s tent with the Adagunodo group, hence the need for us to move on and mobilise our people against the governorship election slated for September 22.

“Omisore is a household name in the political landscape of Osun, he is not a greenhorn in the power play, he understands the terrain better than anyone.

“As it is, he is consulting with leaders of our group to ascertain a better and credible platform as an alternative machinery to achieve his ambition”.

Our reporter further gathered that a meeting, comprising all the foot soldiers of the former Chairman of the Senate Appropriation Committee was held in Gbongan, in Ayedade local government of the state over the weekend, in which many of them considered Social Democratic Party (SDP) as a better alternative.

It can be that Omisore’s faction had on Saturday, March 24, 2018 alleged that the ongoing congress in the state by the PDP was null and void, citing a ” directive from the headquarters of the Independent National Electoral Commission (INEC), which allegedly mandated its Osun State officials to stay away from the exercise.

However, the commission came out to debunk the statement, adding that congress remained strictly party affairs and not within the purview of the electoral umpire.

Meanwhile, the newly elected Chairman of the party in his acceptance speech in Osogbo sought supports from party members to collectively take the party to a greater height.

He also called on aggrieved party members to bury their hatchets and work towards taking the mantle of leadership from the ruling All Progressive Congress(APC).

“Let me therefore use this opportunity to extend a hand of friendship to our fellow contestants who also offered themselves for the service of our party in various positions.

“I want to assure you all that the fact that you lost in this election does not in anyway mean that you are less competent to run the affairs of the party.

“We shall ensure that no member of the party suffers any form of discrimination on the basis of his or her previous affiliation during our crisis period. We shall, in word and in deed show that truly, there are no victors and there are no vanquished.

“The PDP will by the grace of God provide the much needed rallying point for teachers, civil servants, doctors, farmers, students, pensioners and all the great people of Osun State who have been impoverished by the Ogbeni Rauf Aregbesola administration in the last 7 and half years.

“It is highly unimaginable that a governor who inherited an economically viable and socially stable state from the PDP in November 2010 has turned the state into the most heavily indebted state in Nigeria and one with the lowest sustainability index by 2018.

“For members of other political parties who have been indicating interest in joining the PDP but were constrained by the crisis of the last two years, I want to tell you that the siege is now over and our doors are wide open for you to come and join us,” he said.