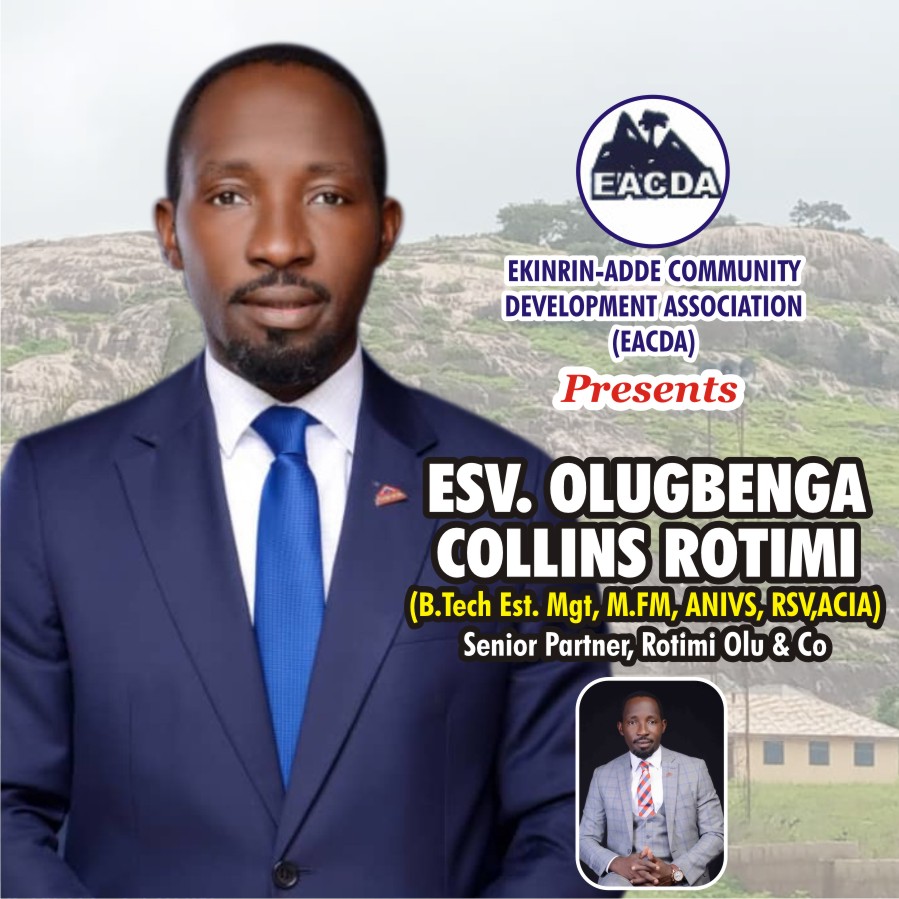 4.Voted Most responsive firm of the year 2019

Ekinrin Adde Community is therefore set to usher him into its prestigious Omo Atata Hall of Fame, come June 18/19, as part of its Annual Cultural Day Celebration.

OMO ATATA HALL OF FAME is a great honour reserved for sons and daughters that have done the community proud in their various fields of endeavor.

His mother was born to the family of late Chief Olumo Makanjuola of Ilaga Clan and Lydia Omojarobi of Ona Adde.

He studied Estate Management from Abubakar Tafawa Balewa University Bauchi where he obtained Bachelor of Technology. He returned to the university where he bagged Master’s Degree in Facilities Management from the prestigious Ahmadu Bello University, Zaria.

He left the company and joined Jide Taiwo and Company and with commitment to duty, diligence and hard work, he rose to become the Manager of Gwarinpa Branch of the company in Abuja.

His remarkable performance and experience in both Companies played a major role in shaping his mind as to what the future holds for him.

This led him to establish his own practice with the aim of improving on services rendered to clients and the general public in 2012.

He is the Principal Partner of his company, Rotimi Olu and Co – a firm of Estate Surveyors and Valuers with the headquarters in Abuja and over seven (7) branches nationwide including Lagos and Lokoja.

He is also a Board Director with over five companies.

ESV. Olugbenga Collins Rotimi has over fifteen (15) years cognate experience as a practising Valuer and Real Estate Consultant. He is happily married with kids.

He has won several awards which include but not limited to:

In 2020 December, he awarded OGO OKUN in Kabba from the ILE ‘YA OMO OKUN prestigious award.

Twitter, Nigerian Government And The Rest Of US. By Babatunde Ajose DCOB.