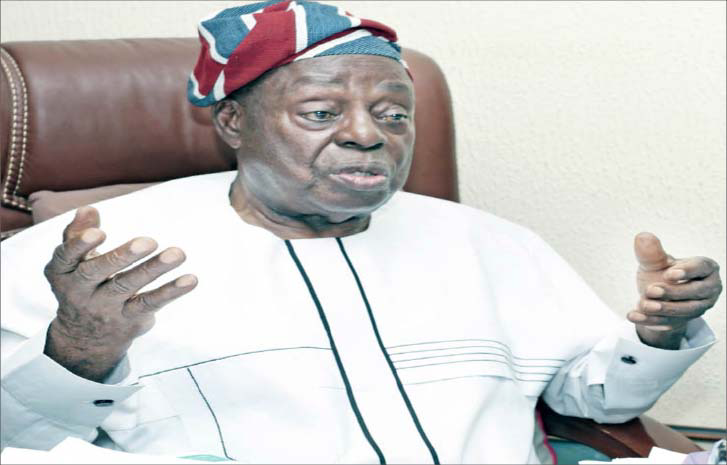 ADO-EKITI – Foremost Senior of  Nigeria(SAN),Aare Afe Babalola  has revealed how he won the land dispute suit  involving two warring communities in Kwara State(Offa/Erinle) in favour of Erinle in 1973 at the Supreme Court.

The two communities had lived with recurring boundary fights with attendant loss of lives and properties.

Babalola  dropped these hints  while playing host to a delegation of Erinle leaders at his office on Saturday warned that ” no individual can review the judgement of the Supreme Court .

Reliving his almost 50 -year legal experience  in the matter Babalola said ” I handled the Erin Ile’s boundary dispute case against Offa in 1971, where the court had given judgement in favour of the town, by  affirming  that a place named ‘Kere Ipinle’, a boundary between the two feuding towns, belongs to Erin Ile.”

“I was the one who handled the case in 1971 and the supreme  court, the highest judicial body in the land,  gave favourable judgement to Erin Ile in 1973.

With this, nobody, no matter how highly placed can review what the Supreme Court had said, that can’t happen”, Babalola warned.

“I am personally interested in this case, because I handled the case ab initio and  by practice and convention, I am part and parcel of Erin Ile Community”.

The Supreme Court had in its separate judgements  delivered by Justices Teslim  Elias and  Mary Odili  , ceded the disputed land to Erin Ile in 1973  and  2018 respectively,  but the Kwara State government refused to implement the verdicts   .

Butttesding Babalola ‘a position  on the matter ,the spokesman  of  Erin Ile delegation, Barr. Muideen Bello, thanked  the senior lawyer  for his service in ensuring justice for the town, regretting that some powerful forces were working against the implementation of the Apex court’s verdict.

“It is  very unfortunate that Supreme Court could be this debased. The powerful people were blocking  the implementation of the judgements we got in 1973 and 2018. This shouldn’t happen in a democracy”.

Describing the constitution of review committee by Kwara Governor on the land dispute as a desecration of the judiciary, the Secretary of Frontiers Club, Erin Ile, Barr. Ibrahim Adeola, accused a top member of President Muhammadu Buhari’s cabinet of working hard to scuttle the implementation of the  court’s pronouncement .

‘ No amount of moves and the dropping of the President’s name  would however change that. The Kwara State government has one duty and obligation on the land matter, and that is to enforce the Supreme Court judgement. Any attempt to use subterfuge to fraudulently seize the land for Offa for any project whatsoever will not work.

“We are aware that in the past few weeks, the Buhari’s aide  has played host to the Olofa of Offa in Abuja, and has taken the latter to meet with some political office holders. We are also aware that top on the agenda of these engagements are the land issue, particularly how to undermine the undisputable ownership of the land by Erin Ile.

“Constitutionally and legally, an administrative panel cannot sit on appeal of the decisions and judgement of the Supreme Court and neither can it impeach judicial pronouncement”, Adeola said.