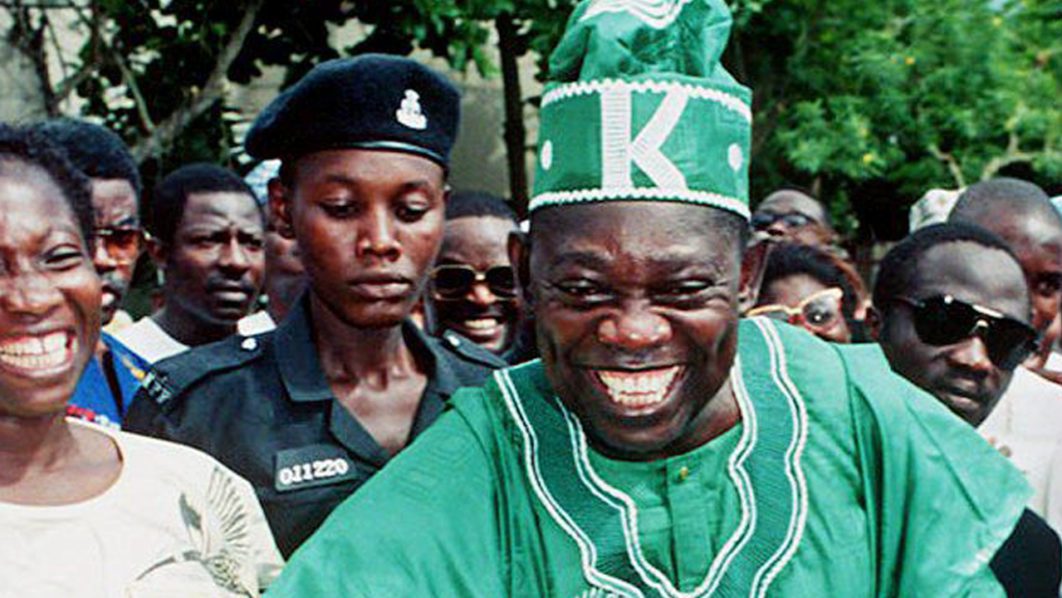 Jamiu Abiola, a son to late MKO Abiola, the acclaimed winner of the 1993 presidential elections, has slammed former President Olusegun Obasanjo for “benefitting on his father’s blood” but neglecting to recognise his contribution to Nigeria’ democracy.

MKO Abiola, the presumed winner of the election that was annulled, died fighting for his mandate while Mr Obasanjo was elected president in 1999 upon the country’s return to democracy.

Jamiu spoke on Sunday in Abuja at an event tagged “Testimonies of Change”, designed to showcase the achievements of President Muhammadu Buhari’s administration.

The News Agency of Nigeria (NAN) reports the event, organised by the Ministry of Information and Culture, witnessed personal testimonies by beneficiaries of government programmes.

Mr Abiola, who was among the testifiers, said for over two decades, Nigerians gave mandate to his father which he was “denied and killed”, the family suffered emotional and psychological torture.

He said his mother, Kudirat Abiola, who also fought for his father’s mandate, was also killed in the process leaving seven children behind.

Jamiu said Mr Obasanjo benefitted from the democracy struggle by his late father and mother when he was elected as Executive President in 1999.

He said in spite of coming from the same region and state as his late father and mother, Mr Obasanjo declined to recognise their contribution to the enthronement of democracy.

He, therefore, commended President Muhammad Buhari, who after over two decades, recognised his father and declared June 12, national Democracy Day.

“What President Buhari has done, despite not being a Yoruba man, has ended the emotional and psychological trauma my family has gone through all these years,” he said.

Jamiu also testified to Mr Buhari’s giant strides in reaching out to the poor people and improving on infrastructure like power, roads, rails.

He said June 12 which his parents paid the supreme sacrifice for, was about the poor and the masses and Mr Buhari had become a replica of the mantra.

He said Mr Buhari deserved a second term, therefore Nigerians should come out to vote for him in the forthcoming election.

Another testifier, who represented the 564 hitherto abandoned pensioners of the Aladja Steel Rolling Mills in Delta, described the president as “God sent”.

Quoting from the Holy Bible, Proverb 29: 2, he said, “When the righteous are in authority, the people rejoice, but when the wicked beareth rule, the people mourn”.

The testifiers said that for decades of previous administrations, they had wallowed in abject poverty and suffered but the Buhari administration wiped away their tears by paying the pensions owed them for decades.

The representative of the ex-workers of the Nigeria Airways, liquidated in 2004, said 800 of their members died waiting for their pensions.

He said Mr Buhari promised to pay them in 2015 and had fulfilled his promise, thereby bringing succour, life and hope to them.

The testifier disclosed that the ex-Nigeria Airways workers would organise solidarity rally in support of Mr Buhari’s reelection in Lagos and Kano.

Mrs Regina, who had been frying Akara (beans cake) in Nyanyan, a suburb of FCT for 30 years, said she benefitted from the federal government’s TraderMoni programme.

She said it was the first time any government had supported her petty trade and commended the Buhari administration for the intervention.

The elderly woman spoke in Igbo language with her son, a graduate of University of Benin, interpreting in English.

The woman disclosed that she trained her three children to university level with her trade and urged the administration to provide employment for them.

Livinus Okoh, the Chairman of Rice Growers Farmers Association in Ebomyi, said the Anchor Borrower Programme of the administration recorded tremendous achievements on local production of the staples towards self sufficiency.

He declared the support of rice farmers nationwide for the re-election of the president.

Aruwawa Johnson from Warri said “opposition must stay clear of Buhari’s reelection” because Nigerians are behind him.

Mr Johnson said the completed rail project in Aladja in Delta to Itakpe in Kogi had impacted positively on the lives of the people who were predominantly farmers.

Monarchs, including Oba of Sao, Bamidele Alabi, Oba of Jebba, Abdulkadir Adebara and the Baale of Bodesaadu, Bolakale Yusuff, all in Kwara, commended the Buhari government for the rehabilitation of Ilorin-Jebba-Mokwa road.

They said that the road had taken many lives and goods in carnage when it was abandoned by previous administrations.

They thanked the president for coming to the rescue of their people and the road users.

Mrs Oloyede, and Wasiu Oriade, beneficiaries of Bank of Industry social welfare scheme; Dike Charles, Abubakar Haruna, Aliyu Hassan and Olalekan Ayodele who are NPOWER beneficiaries in various vocations, testified to the success of government programmes through its intervention.

Under Buhari, Boko Haram stronger than ever before – Obasanjo