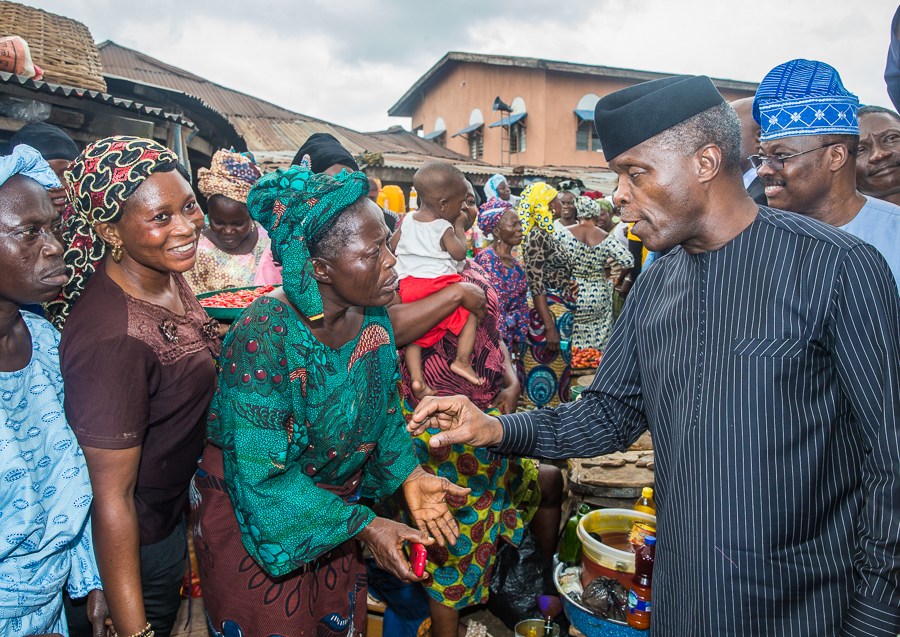 He made the statement in an open letter titled “Point for Concern and Action” which he distributed to journalists at a press conference held at his house at the Olusegun Obasanjo Presidential Library, Abeokuta.

The former president who expressed disappointment in Mr Osinbajo’s activities said he has shown human weakness and proved the saying that the corruption of the best is the worst form of corruption.

“Osinbajo must have gone for, “if you can’t beat them, join them,” he said.

TraderMoni is a federal government initiative aimed at providing two million petty traders across the country with collateral-free loans.

The vice president has in the past five months travelled across the country, distributing N10,000 to petty traders in a bid to empower them.

In his letter, the former president wondered where the federal government got the money from and questioned the future of Nigerians who lost their jobs in the past three and a half years.

“What an act by a Senior Advocate of Nigeria lawyer, number 2 man in the Executive hierarchy; and what is more, a pastor of one of the Christian movements led by a revered, respected and upright church leader, Pastor E. A. Adeboye. Osinbajo must have gone for, “if you can’t beat them, join them”. A great pity indeed and which makes people ask the questions, “Any hope?” Yes, for me, there is hope. Osinbajo has shown the human weakness and proved the saying that the corruption of the best is the worst form of corruption. His explanation that it was their government programme can only be construed to be very shallow and lopsided, if not an outrightly idiotic programme.

“Traders in rural and sub-urban areas of Nigeria are many more than those in urban areas and they are much poorer than traders in Lagos, Abuja and other cities. They need more attention and greater help. Are they to be confined to the heap of perpetual poverty? What of those who are not traders? They are not entitled to hand-out and they can languish in penury? And what about millions who have lost their jobs in the last three and a half years? The timing is also suspect. Those who criticise the action are called evil but they are not evil as they know what they are doing and saying, and they love Nigeria and Nigerians not less than the likes of Osinbajo. They are not devils incarnate; they are patriots.

“What is the connection between taking the number of PVC (Permanent Voters Card) of the recipient of the N10,000 doled out to ‘traders’ and the forthcoming election? There is something sinister about it, and Professor Osinbajo, of all people, should know that. With collusion of the INEC officials and card readers not made to work, anybody quoting the PVC number may be allowed to vote as the revised Electoral Bill was not signed.

“And if that happens all over the country, it will be massive rigging indeed. The Chairman of INEC must stand firm and carry out his duties with competence and unbending neutrality. Card readers must be used without fail and accreditation must be completed and number ascertained and made public before voting commences as was done in 2015,” he said.

Mr Obasanjo also attacked President Muhammadu Buhari in his letter, accusing him of planning to rig the election.

The presidency on Sunday evening replied Mr Obasanjo, saying he is jealous of the president’s achievements and thus turned to tell lies.

“As the grand patron, more correctly the grandfather of corruption as described by the National Assembly, Chief Obasanjo released today’s letter purely for the reason of rescuing his thriving corruption establishment,” he said.

Mr Obasanjo was one of the millions of Nigerians who supported Mr Buhari in the 2015 presidential election. He has since withdrawn his support for the president, accusing him of incompetence and nepotism.

Mr Buhari is seeking re-election on the platform of his party, APC with Mr Osinbajo as his running mate. The presidential and National Assembly elections will hold on February 16.

Under Buhari, Boko Haram stronger than ever before – Obasanjo

Buhari Hits Back At Obasanjo After Explosive Letter.