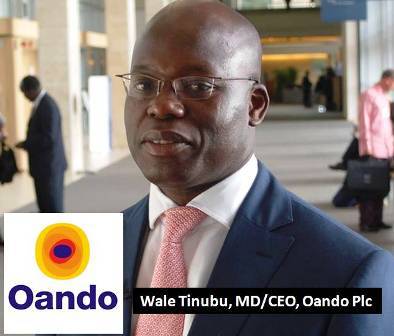 These are not the nicest of times for Oando Plc. MD/CEO, Wale Tinubu as the Securities and Exchange Commission (SEC) has ordered a forensic audit into the activities of Oando Plc.

SEC in a short letter signed by the acting Director-General, Dr. Abdul Zubair: “‘Re: Forensic Audit into the Affairs of Oando Plc.’ – Further to our letter to you dated November 27, 2017 and another letter to your lawyers dated November 28, 2017, wherein the Commission had notified Oando Plc of its decision to go ahead with the Forensic Audit, the Commission in the light of recent developments wishes to reiterate the following:

“While we acknowledge that a Notice of Appeal has been filed to challenge the judgment of the Federal High Court, this notice does not serve as an Order of Court restraining the Commission from conducting the exercise.”

“We wish to restate that our forensic auditors had been directed to commence work since November 27, 2017 and as a result shall be at your premises on any date from Wednesday, December 6, 2017.”

“Kindly accord them the necessary assistance.”

It is interesting to know that SEC’s attempt to resume the forensic audit was interfered by the Minister of Finance, Kemi Adeosun when she ordered SEC suspended boss, Gwarzo to discontinue the audit, which he objected to.

Gwarzo’s refusal and subsequent letter that she should put her verbal instruction into writing in her capacity as the chairman of the board of SEC, led to his suspension.

The forensic audit of Oando followed two petitions SEC received from a concerned shareholder, Dahiru Mangal, and an indirect shareholder, Ansbury Incorporated, over alleged mismanagement of the company’s financial affairs and distortion of its shareholding structure.

Following the petition, SEC said it conducted a comprehensive review, which revealed massive breaches of the provisions of the Investments & Securities Act and the SEC Code of Corporate Governance for Public Companies.

Consequently, the commission announced the appointment of a consortium of experts, consisting of auditors, lawyers, stockbrokers and registrars, to conduct the forensic audit, while the shares of Oando the Nigerian Stock Exchange (NSE) were placed on a technical suspension.

Insiders disclosed to us that the forensic audit of Oando Plc may lead to the sack of the company’s management headed by Wale Tinubu.