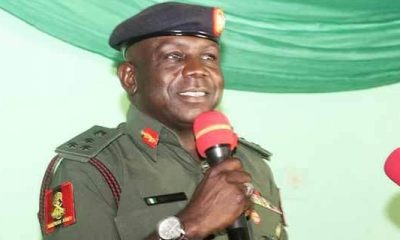 Zakari Kazuare, the Director General, National Youth Service Corps (NYSC), on Thursday, warned corps members against crime despite his agency’s failure to inform Nigerians of its findings in a case of certificate forgery levelled against a serving minister.

It was reported that the finance minister, Kemi Adeosun, skipped the mandatory one year youth service and went ahead to procure a forged NYSC discharge certificate.

The minister is yet to respond to the findings, over 60 days after the scandal was unearthed.

The NYSC, apart from a vague release saying the minister applied for a discharge certificate and that it is investigating is yet to inform Nigerians of its findings weeks after.

The presidency, through its spokesperson, Garba Shehu, a few days ago also said it is still investigating the matter and would take ‘appropriate’ actions if the minister is found guilty.

Mr Shehu also said he did not know when ‘investigations’ will be concluded.

Meanwhile, while Nigerians continue to chide the government over its unwillingness to act decisively, the Citizens Advocacy for Social and Economic Rights has finalised plans to institute a class action against the Independent Corrupt Practices and Other Related Offences Commission (ICPC) for its failure to investigate the matter.

The Attorney-Gemeral and the NYSC are also to be linked in the suit. The group had earlier given the ICPC a seven day notice to investigate the matter. The ICPC ignored the notice.

On Thursday, the DG said at the NYSC Permanent Orientation Camp, Iseyin, Oyo State, that it was important for corps members to observe all rules and laws regulating the scheme.

“My dear children in the service of nation building, there is no better time for you than now to make the difference; the nation expects so much from you, and you cannot afford to let us all down at this critical period.

“Do not take undue advantage of the opportunity that would come your way during next year’s general elections to perpetrate criminal activities,” he said.

Mr Kazaure said that laws of the land would be invoked on any corps member who acted in contravention of laid down rules.

He also warned the corps members against unauthorised journey during the service year, as it sometimes resulted in avoidable death and injuries.

“We the managers of this noble scheme are always at a great loss whenever we lose patriotic corps member to avoidable and needless circumstances,” he said.

She also appealed for more operational vehicles for better coordination and movement of members.