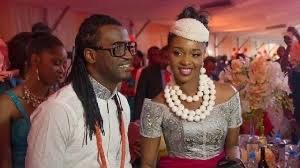 Anita Okoye, the wife of Nigerian singer, Paul Okoye of the defunct music group, Psquare has petitioned a court to dissolve their marriage.

Anita has requested the dissolution of their marriage.

She also advised her now estranged husband in the legal document to challenge the petition if he feels disgruntled.

There had been rumours of the couple’s split for months now.

Anita first sparked divorce rumours in April when it was reported that she relocated with their three children to the United States of America.

In 2019, she was accused by a popular aphrodisiac vendor of buying items to keep her marriage together. The vendor later took down the story from Instagram.

Funke Akindele-Bello Opens Up On Failed Marriage, Warns Ladies Against Desperation For Husbands