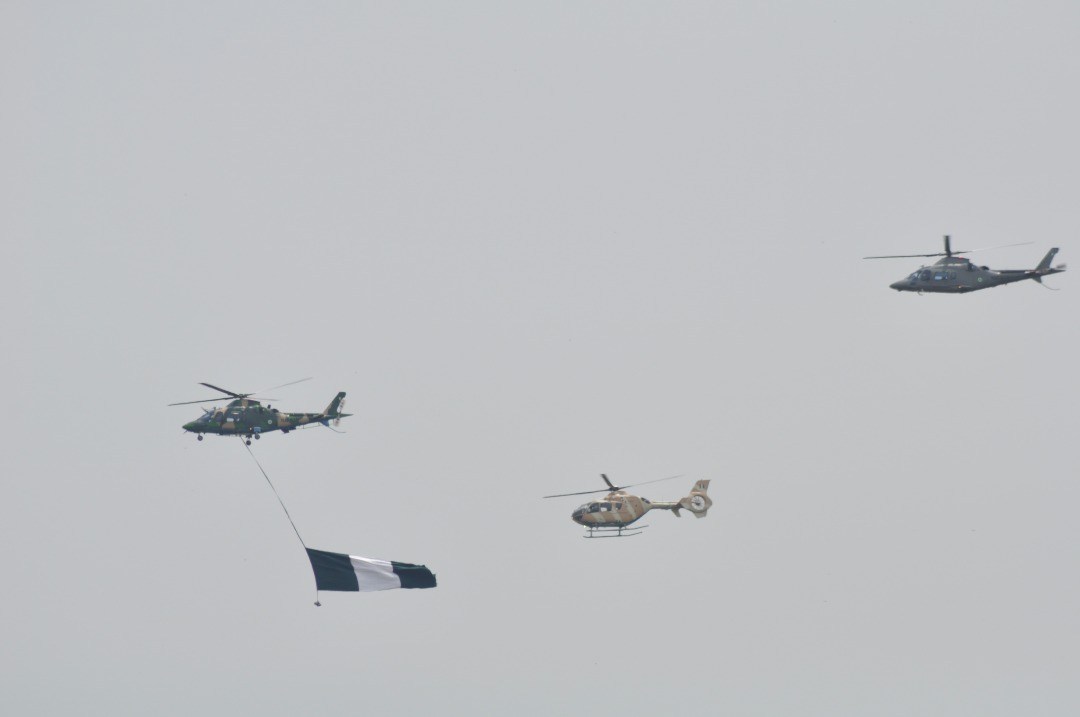 n a daring and fearless move, well-trained fighter pilots of the Nigerian Air Force (NAF) mounted 23 aircraft and participated actively at the 58th Independence Day Celebration in Abuja, despite losing one of their colleagues in rehearsal air crash few days ago.

PRNigeria gathered that the 23 aircraft that participated in the aerial show by the Nigerian Air Force at the ceremony included helicopters, fighter jets, C-130, heavy airlift, medium and light airlift aircraft.

The pilots who participated at the Independence Celebration today were mostly young and middle-cadre officers under the command of a top-ranking air force officer. They exhibited great aerobatics display to the admiration of President Muhammad Buhari and top public functionaries who witnessed the occasion at the Eagle’s Square Abuja.

PRNigeria observed an emotional moment after the aerial parade and successfully landing in the airport, when some of the young pilots emerged from their aircaft and embraced themselves with tears as they prayed for their lost colleague and survivors.

The Nigerian Air Force (NAF) has boosted its air fleet with 49 fighter planes and attack helicopters in the last three years. It also reactivated 15 helicopters and trained over 90 pilots.

Early in the day, President Muhammadu Buhari took the salute at the Eagle Square, Abuja, as military and para-military organisations held a colourful parade in commemoration of Nigeria’s 58th Independence.

The event was the first full-fledged Independence Day parade since the celebration was marred by an explosion, which occurred near Eagle Square on October 1, 2010.

Shortly after arrival at the square, the president, who was the Special Guest of Honour, mounted the parade car and inspected the Guards.

After the inspection of Guards, Mr Buhari took the presidential salute.

The parade, commanded by Muktar Dauda, then commenced the match past, which broke from slow to quick march in synchronised format attracting applause from the spectators.

After the match past, there was a display of equipment by the Army, Navy, Police and Air Force, which was followed by firing of volleys and 21-Gun Salute.

Soon afterwards, the president received three hearty cheers and granted permission to the parade commander to march off the parade.

Notable absentees at the celebration were the duo of Senate President Bukola Saraki and Speaker, House of Representatives, Yakubu Dogara.

God didn’t make a mistake when He created Nigeria – Buhari