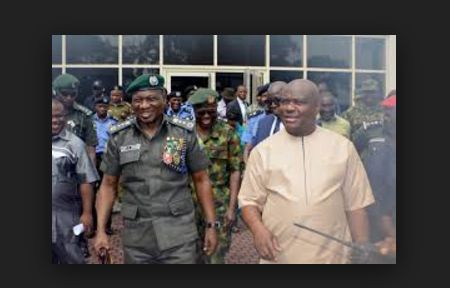 The Nigeria Police Force has dismissed allegation by Governor Nyesom Wike of Rivers State that the Inspector-General of Police, Ibrahim Idris planned to kill him.

It described the allegation as malicious, saying it’s capable of misleading and causing disaffection between the NPF and the people of Rivers State, the police spokesman, Jimoh Moshood said in a statement.

Wike had in an interview said the IG had instructed the state Commissioner of Police to kill him, but the police countered him, saying the governor is being guarded by 221 policemen.

CSP Moshood stressed that the governor had more policemen than some police area commands in some states and also faulted claims by Wike that nine Commissioners of Police had served in the state since the IG assumed office, hinting that only three CPs had served there.

“It is incumbent on the Nigeria Police Force to educate the general public and draw the attention of the governor to the facts and figures available for press and members of the public to verify, that there are 221 police personnel attached currently to Governor Nyesom Wike for his personal and office protection.”

Others are one Camp Commander; one Admin officer to administer the police personnel, 54 Inspectors, 136 Sergeants and 24 Corporals.
Related Topics:
Up Next