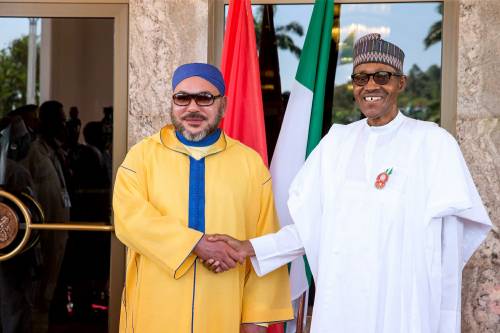 A coalition of labour and trade unions have vowed to frustrate
Nigeria’s fish and fertilizer trade agreement with Morocco.

In a press briefing on Wednesday, the 20-organization strong
partnership – Nigerian Movement for the Liberation of Western Sahara
(NMLWS), accused Rabat of selling phosphate and seafood from the
Saharawi Arab Democratic Republic to Nigeria.

The group chaired by Ibrahim Gambari, Nigeria’s former foreign affairs
minister, said it would picket companies in Nigeria that process
fertilizer from phosphate supplied by Morocco.

“We put all those dealing in stolen Western Sahara natural resources
including their fishes on notice that they cannot continue to do
business as usual,” the group stated.

“After giving this notice to the Nigerian companies dealing in stolen
Western Sahara resources, we will picket them across the country and
bring them before our courts. This also includes supermarkets selling
sardines and fishes from Morocco because   92 percent of these fishes
are stolen from the Western Sahara coast. The group accused President
Muhammadu Buhari of supporting the self-declaration of independence by
the Western Saharan state in 1984 and doing the opposite 35 years
later.

“Nigeria in December 1984 then led by General Muhammadu Buhari,
recognized the SADR as an independent African country. This was after
the Saharawi had thrown off the colonial yoke of Spain.  It is,
therefore, inconceivable that 35 years later, under an elected
President Muhammadu Buhari, Nigeria would tolerate the occupation of
the same country by a sister African country and be receiving the
natural resources of Western Sahara plundered by Morocco,” it added.

The President Muhammadu Buhari administration had in December 2016,
reached an agreement with the state-owned Moroccan firm OCP, to
produce 1 million tons of locally manufactured fertilizer annually.

The memorandum of understanding signed with the company included the
supply of raw materials for fertilizer production such as phosphate.

The group insisted that while it wanted Nigeria to develop its
fertiliser capacity, it will not permit the use of stolen resources.

It stated further, “This movement supports the development of Nigeria,
but not with stolen resources. We insist that although our country
needs fertilizer, but not that produced with the blood of our brothers
and sisters in Western Sahara. About this, we are definite. This
principle is planted in the Nigerian culture of non-exploitation of
other peoples and defender of colonized peoples as we did in the
struggle for the liberation of countries like Guinea Bissau,
Mozambique, Angola, Zimbabwe, Namibia, and South Africa.”

Despite a 1975 judgment denouncing Morocco’s claim to SADR by the
International Court of Justice, Morocco went on to forcefully occupy
the territory. After a bloody war, Moroccan forces pushed most of its
population into refugee camps in Algeria.

Morocco left the Organisation of African Unity now African Union in
1984, for recognizing the independence of SADR. It recently rejoined
the AU but is still laying claim to the mineral-reach Western Sahara.