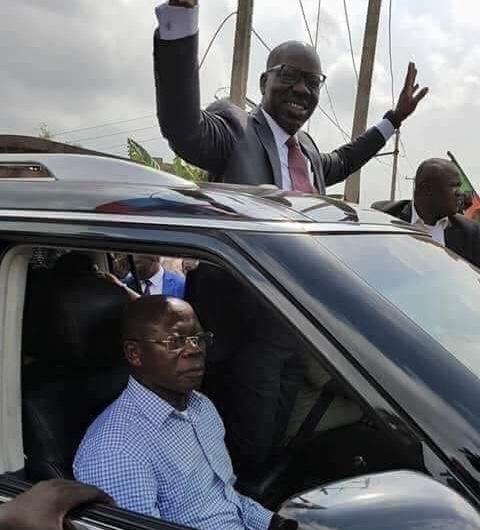 The Governor of Edo State, Governor Godwin Obaseki appears to have set aside the alleged rift between his administration and his predecessor, Comrade Adams Oshiomole when he called on the Iyanmoh residence of the latter in celebration of Eid al Adha.

In his special Sallah message to the Muslim community last week, the governor had enjoined all citizens to eschew bitterness and rancour and work for the development of all of Edo State.

The Governor demonstrated the virtues of the season with his visit to the Party Chairman and his mother, Hajia Aishetu Oshiomole, in spite of the rumoured differences between both men.

During the visit, Governor Godwin Obaseki expressed his delight at the incredible support he received from the Muslim community and reiterated his commitment to the transformation of Edo State and the empowerment of all its people.

In response, the Otaru of Auchi commended the governor for his uncommon leadership and advised him not to succumb to the forces of darkness preaching division in Edo State. He encouraged the Governor to remain prayerful and continue to strive in the interest of the people.

Speaking after the visit, the Special Adviser to the Governor on media and communications, Mr. Crusoe Osagie congratulated the Muslim community and lauded the Governor for his demonstration of exemplary leadership. He suggested that the visit would likely unnerve a tiny fraction of the people of the state.

“The notion that these two men are adversaries is being propagated by morally and financially insolvent people seeking to profit off of the challenges they have been working so hard to foment. You cannot blame such people really. Their talents and abilities are severely limited, so it is in their collective interest to stoke tension and drive division, but I can tell you that they have already failed” he posited.

“It is not in their interests for Edo State to peacefully progress, so they will try to mis-categorise this visit. This is what they’ve always done and it’s their stock in trade”.

“True leaders understand that they represent the people in whose interests they must serve. This is why His Excellency has always said that the resources of the state, are for the people only, and not for a negligible minority and nothing can ever change this” he concluded.

Asked whether this means that a new proclamation of the State House of Assembly will be issued by the Governor in conformity with the directives of the National Assembly, Osagie was unequivocal. “I cannot speak on this matter as it is sub-judice. But I think the whole world knows that the Edo State House of Assembly has already been inaugurated. No person or group of persons or institution other than the judiciary can order a state governor to do anything on a matter that is presently before courts of competent jurisdiction.We are a nation of Laws and by the special grace of God, will all be alive to witness the law run its full course” he concluded.

The True Story on El-Zakzaky in India