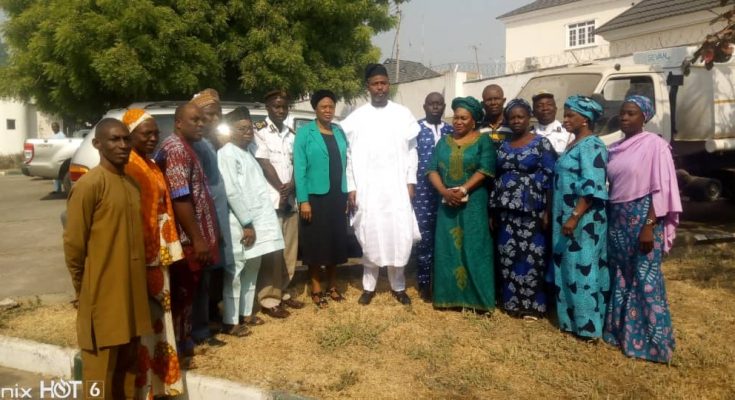 Omofaiye, a former member of Kogi State House of Assembly, was among the 17 new commissioners sworn-in on Wednesday at Government House, by His Excellency, Gov. Yahaya Bello.

Omofaiye commended the management and staff of the ministry for their efforts and contributions to see to the progress and development of the ministry, assuring that their togetherness would bring in more developments.

He called for more of their support and cooperation while encouraging them to let all hands be on deck and put in their best so that they would collectively achieve the goals of His Excellency’s Blueprint on environment.

He also assured the staff that he would always be opened to any advice or suggestion from any staff which would bring rapid development to the ministry, urging them to feel free and comfortable to approaching him on any issue.

The commissioner stressed that he was banking on the cooperation of the entire staff of the ministry to turn things around for better.

He, however, warned them against lateness to work, absenteeism and other vices, stressing that he was in the ministry strictly for business.

”We have to hit the ground running and I know with your cooperation, we will succeed. I know we will never regret our coming together”, Omofaiye said.

Earlier, the Permanent Secretary of the Ministry, Mrs Hannah Odiyo, congratulated the new commissioner, saying the governor knew that he had the capacity to move the ministry forward.

She noted that the ministry remained a sensitive organ of government as environment remained the outlook of any state which give an idea of the quality of the state and the people in terms of hygiene, cleanliness, among others

According to her, the MENR is among other sectors of government saddled with the responsibility of ensuring environmental cleanliness and protection in addition to control of ecological problems.

She noted that the ministry had two agencies namely: Kogi State Environmental Protection Board (KOSEPB) and the State Sanitation and Waste Management Board (KSWMB) as well as seven Directorates collaborating for effective service delivery.

She assured the new commissioner of the full support of all the management and staff of the ministry for effective performance and service delivery.

The  management and staff of the ministry joyfully received the new commissioner on assumption of office, and expressed their high expectations.

Mrs Elizabeth Oloruntoba, the Director of Administration and Finance (DAF) of the ministry, promised on behalf of management and staff to work assiduously with the commissioner, praying that God would used him to restore the lost glory of the ministry.

Prior to his appointment as the Commissioner, Omofaiye was a member of Kogi State House Assembly representing Ijumu State Constituency where he served as the Chief Whip to the house.

Maryam and the mirage called love