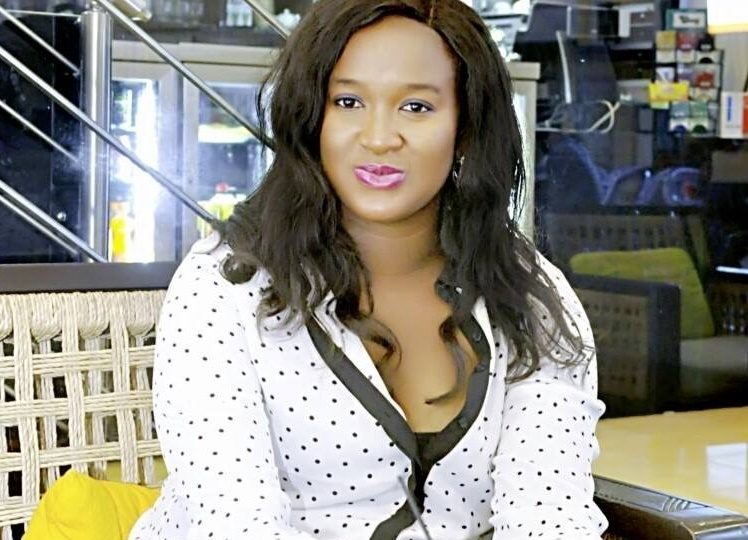 A popular social and political commentator, Ms Olufunke Phillips may be in for troubles in the coming days.

Phillips was the digital manager of Lagos State Governor-elect, Babajide Sanwo-Olu, and she has been alleged to be a fugitive after being charged for cocaine possession.

It will be recalled that Phillips was recently exposed by a Nigerian journalist, Ruona Meyer.

The dirty disclosure was said to have attracted the attention of the National Leader of the All Progressives Congress (APC), Asiwaju Bola Ahmed Tinubu, who reportedly ordered Sanwoolu to disband his campaign team immediately.

It was gathered that the scandal got to the leaders of the APC as a rude shock and that they have warned the incoming governor that such an element must not be found around him after his swearing in on May 29, 2019.

It was alleged that she was arraigned before Justice P.I Ajoku of the Lagos Division of the Federal High Court in 2007 but she, alongside 25 others absconded after being granted bail by the judge.

The case seemed to have been forgotten until she publicly fell out with Ms Meyer, who holds a dual Nigerian-German citizenship, brought it back to the fore.

According to Ms Meyer, the two former associates had teamed up to establish ‘The Beverage Space,’ a website that focuses on alcohol consumption, years ago.

She said she brought Ms. Phillips onboard because she needed a face for the brand since she wasn’t based in Nigeria at the time, adding that she solely funded the project.

Ms Meyer, however, said she pulled the plug on the venture after her background checks revealed her partner as a fugitive.

But years later, Ms Phillips began her own website which she renamed ‘The Beverage Room’ based on the same ideas.

The website is currently being run by Ms Phillips and commands a large following on social media. The group currently boasts over 82,000 followers on Facebook alone.

In a Facebook post, Ms Meyer explained that she was making a public disclaimer to fully dissociate herself from any from business dealings she had with Ms Phillips in 2015 and 2016.

“I terminated our business dealings in 2016 after I found out @FunkePhillips is facing cocaine smuggling charges (with a 2009 court case); and on 4 July 2011, @ndlea_nigeria listed her as skipping bail,” Ms Meyer’s Facebook post read.

Ms Meyer, an ex- BBC Pidgin journalist, also challenged her erstwhile business partner to take down the website or face her in court.

To back her claims, Ms Meyer also shared receipts of her payments for logo design, website hosting. She also expressed her disapproval of Ms Phillips’s continued claims to be the owner of the business.

She explained, “I handled the blog, edited written copy, tapped my contacts in Corporate Communications, PR & media in general, to boost our networks. Funke Phillips had no money, so I handled practically all costs…including domain hosting, calls to contacts, sending proposals for sponsored events planning hangouts, generating content ideas and even doing interviews from Germany with my Nigerian contacts.

“Soon, we were about to get into signing partnerships, when my manager in Germany reminded me to do a character check on Funke Phillips. I remembered I’d heard some absurd rumours and went online to check.

“The report stated that the information that Funke and other alleged drug barons were on the loose was corroborated by then @ndlea_nigeria spokesperson Mitchell Ofoyeju (@mitchelljnr) cc @dg_ndlea.”

Ms Meyer reportedly explained the reason why she decided to publicly dissociate herself from her one-time business partner.

“So I am not asking for money, or care what Nigeria does to her or not. After all, she has skipped bail for years and is not exactly hiding.

“I care because I am held to a higher standard, personally, family-wise, and as a citizen of Germany. I would be a pariah, unworthy of any semblance of public life if I were ever associated with a drug-smuggling criminal, who also skipped bail. So I have to disclaim it. Publicly too.”

Ms Phillips, who is also a popular social and political commentator on Facebook, has however kept mum on the issue. Efforts by this newspaper to get her own side of the story have been unsuccessful as phone calls and text messages to her have been unanswered.

I’m making this PUBLIC disclaimer to FULLY dissociate myself from business dealings I had with Olufunke Phillips in 2015/2016, which I terminated in 2016, after I found out @FunkePhillips is facing COCAINE smuggling charges (with a 2009 court case); and on 4 July 2011, @ndlea_nigeria listed her as skipping bail. Link here, full screenshots in comments.

In 2015, I originated and conceptualised a blog and event portal on the business of drinking, from a female perspective. I needed a face for it, as I was not based in Nigeria. This is where Funke Phillips came in. I later called it The Beverage Space.

I set up all email, Twitter, Instagram, Facebook accounts, paid a designer to make a logo (seen here for August 2015 – mail of her choosing logo), everything. All Funke Phillips had to do was go to events/bars, send in little notes, writings.

I handled the blog, edited written copy, tapped my contacts in Corporate Communications, PR & media in general, to boost our networks. Funke Phillips had no money, so I handled practically all costs…including domain hosting, calls to contacts, sending proposals for sponsored events planning hangouts, generating content ideas and even doing interviews from Germany with my Nigerian contacts.

We started to make progress in a very short time; I flew into Nigeria, arranged meetings with my contacts, I will not mention them here, as they are private people and I may need their private testimony for court.

But each time I told them I’d be working underground, as I was based outside, working on my day job anyway, and so Funke Phillips would be TBS’ face. She attended some meetings, and was aware.

Soon, we were about to get into signing partnerships, when my manager in Germany reminded me to do a character check on Funke Phillips. I remembered I’d heard some absurd rumours, and went online to check…

I discovered Funke Phillips was arrested in a Lagos airport with 3.14kgs of cocaine, and skipped bail, prompting then @ndlea_nigeria chairman Ahmadu to list her among wanted “drug barons” in July 2011. Pics attached as comments

I next used my contacts in the courts and prisons to legally crosscheck these facts, and presented the situation to @FunkePhillips, asking her to explain. See her case file number photo also in comments.

In private chats I will reserve for the court, Funke Phillips said she “went through a lot to settle the case.” I replied that the only way the case could be settled was if she was ACQUITTED, or SERVED TIME, but not so, according to @ndlea_nigeria

In comments are screenshots that show that weeks after @ndlea_nigeria noted her as a “drug baron” on the lam, Funke Phillips was online, on social media.

I, therefore, asked Funke Phillips for her documents of acquittal. She responded that this was the work of her enemies. With such answers, I told her I could NEVER work with her on any basis; we needed to cut all ties immediately.

Specifically, I told Funke Phillips I would pay off those I had contracted to work for us, handle all the bills, take down everything to do with TBS– I wanted NOTHING more to do with a fugitive…even if Nigeria is mediocre enough to allow people like Funke Phillips with a pending drug case walk the streets freely. This absurdity was not going to be my norm.

I told Funke Phillips that in fact, I did not care what happened in Nigeria. I cared about my career and life in Europe, where even the whiff of an association with criminality is just as bad as criminality.

Therefore, over subsequent communications, particularly through mutual friends, I asked her to make sure she never referred to me as someone she worked with, never referred to or made similarities to TBS…to ensure she never used any similar idea or contacts made, so that people would not subconsciously associate me with her, as we had gone far. Funke Phillips agreed. I added she was a fraud and must do right by the law.

HOWEVER I thereafter had major surgery, job moves, and JUST discovered that in fact, shortly after this, Funke Phillips set up THE BEVERAGE ROOM (TBR), using many ideas, & in some instances, even same contacts.

Worse still, when I raised the issue 72 hours ago, contacts have since come to tell me they thought I was still a silent partner at TBR, and that is why they joined online groups, bought t-shirts, went to and had events, etc.

To be clear: I publicly (via social media) tagged Funke Phillips, asking her to pull down TBR, because it is a rip-off of TBS, and she knows why she has to: Intellectual property theft, and the matter of GROSS criminality.

Rather, Funke Phillips and her “associate” have since said I am doing it because I am “jealous” and I want to pull her down because I heard she is an aide to Lagos state governor-elect Jide Sanwoolu. FOR THE RECORD: I ALSO JUST HEARD ABOUT THIS LESS THAN 72 HOURS AGO.

So, Funke Phillips, to reiterate what I told you 3 years ago: I DO NOT CARE what Nigeria does to you, or whether this country ignores your criminality and rewards you – after all, you will not be the first fugitive to pop up in government circles in Nigeria.

Because unlike you, I operate under a far different code of integrity and ethics – filial-wise, professionally, and by virtue of being a German citizen.

Based on my dealings in Germany, I cannot be seen to have ever had any associations with someone linked to drugs, even more with someone like you, Funke Phillips, cited as skipping bail and being a fugitive.

THIS is the reason for this public disclaimer, Funke Phillips. This is not about money, so, when I head to court to force a pull-down of TBR, I am more concerned about DISSOCIATION and intellectual property theft.

Because Funke Phillips you simply cannot afford what I would term requisite compensation for my intellectual property. Even if you could, I would never prioritise collecting money from a fraudulent character like you.

Simply because again, I operate under a different set of personal and locational principles. On that note, Funke Phillips should you still refuse to do the needful, and pull down TBR, I will see you in court. Please, try to show up this time.

But a short bio on thebeverageroom.co claimed Phillips launched The Beverage Room, which Meyer said was founded based on her original ideas, in 2015 to “chronicle her love for Coffee, Wine and Spirits. She started an Instagram, Facebook page and a blog sharing tips, tricks, findings and other things.”

Olusesan Daini, who headed Babajide Sanwo-Olu’s media team during the campaign said, Phillips was diligent when she worked with him and that he was surprised to hear about Meyer’s allegations.

When asked if he recruited her for the campaign, Daini said she was contracted to consult “for the purpose of election”.