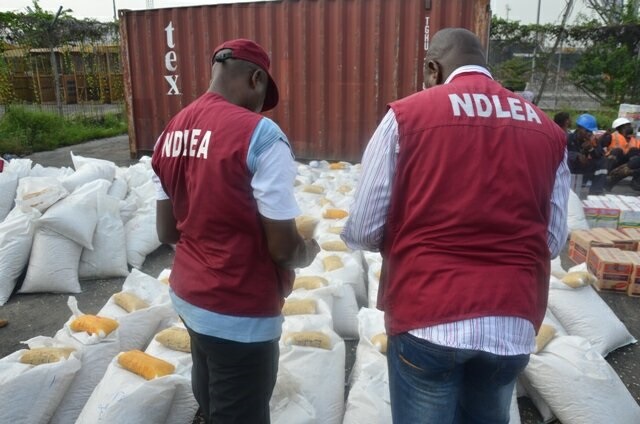 Seven Indians, three Nigerians were today arraigned before a Lagos Federal High Court, by the men of National Drug Law Enforcement Agency (NDLEA), for Smuggling 43.1 kilogrammes of Cocaine into the country.

Also arraigned before Justice Ayokunle Faji led-court alongside the Defendants was a limited liability company, Oilways Logistics and Energy Limited.

The defendants were arraigned on a two-count charge of conspiracy and unlawful importation of the said banned drug by NDLEA prosecutor, Theresa Asuquo.

The defendants according to the charge marked FHC/L/100c/2021, were arrested with the banned drug on February 8, 2021, at the Tin Can Port, Apapa, Lagos, on board a vessel named MV SPAR SCORPIO.

The defendants, were alleged to have conspired with Franklyn Pereowei Godwin and Peter Odigie Ozasuwa, said to be at large.

The offences according to the anti-narcotic agency are contrary to and punishable under section 11(a) and 14(b) of the National Drug Law Enforcement Agency (NDLEA) Act Cap N30 Laws of the Federation of Nigeria (LFN) 2004.

However, after their arraignment today, Justice Faji, following the submissions of Femi Atoyebi, Tunde Adejuyigbe both Senior Advocates of Nigeria (SAN), Obatayo Aina, Richard Aina and Usuala Nwagbara, allowed the Indians to continue with the administrative bail terms earlier admitted them, while admitting bail to the Nigerians in various terms.

Justice Faji, however, ordered the defendants to submit their traveling passports to the Court’s Deputy Chief Registrar (DCR) and that they must have the court’s permission before travelling out of the country.

Charges against the Defendants Reads: “that you Tobi Ojo (M), Kunle Animashaun (M), Franklyn Pereowei Godwin (M), presently at large, Peter Odigie Ozasuwa (M), presently at large and Oilways Logistics and Energy Ltd (A company registered in Nigeria) on about the 8th of February 2021, at the Tincan Port, Apapa, Lagos State within the jurisdiction of this Honourable Court without lawful authority imported 43.110 kilogrammes of cocaine , a narcotic drug, and thereby committed an offence contrary to and punishable under section 11(a) of the National Drug Law Enforcement Agency (NDLEA) Act Cap N30 Laws of the Federation of Nigeria (LFN) 2004.