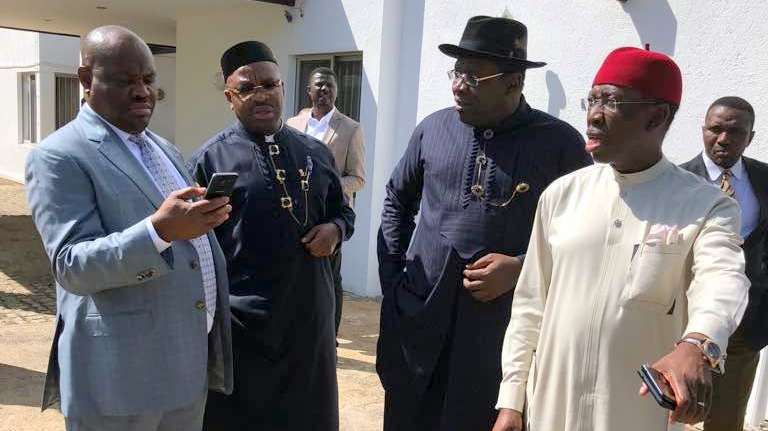 The N30,000 minimum wage demand of labour unions is “neither realistic nor sustainable,” the Nigeria Governors Forum has said.

Instead, the NGF said, states should pay a minimum wage of N22,500 but any governor who can pay more than this is free to do so.

The forum also said insinuations by the Nigeria Labour Congress (NLC) that its members were unwilling to pay N30,000 minimum wage were untrue. It said its members were willing but unable to meet the demand of the workers’ union.

The NGF said a report titled “Minimum Wage: NLC wants governors who diverted bailouts probed” is an attempt by the leadership of the NLC to steer the public away from the promise by President Muhammadu Buhari to constitute another committee to review the minimum wage impasse.

The Head, Media and Public Affairs of NGF, Abdulrazaque Bello-Barkindo, disclosed this in a statement sent to PREMIUM TIMES Monday evening.

The NLC has been at loggerheads with the federal government over a new minimum wage.

President Buhari has however refused to commit to the new proposal.

Instead, the president said during his budget presentation speech on Wednesday that he would set up a technical committee to review the N30,000 proposed by a tripartite committee earlier set up by the federal government.

State governments have also said they would not be able to pay the N30,000 minimum wage.

The NLC said it would not partake in any further negotiation of the N30,000 and that all the president needs to do is send a bill to parliament for a N30,000 minimum wage.

The labour congress, a registered coalition of many workers’ unions, also said it will hold a one-day protest against the president’s action on January 8, 2019.

But Mr Bello-Barkindo in the statement said the governors have collectively said they would have been happy to pay workers the N30, 000 “but many states cannot afford it due to financial constraints and other limitations.”

He said the governors had earlier announced that no state would devote more than 50 per cent of its revenue to salaries.

“Let it be known that governors have met the President twice on this matter and presented their books to buttress their point,” he said. “First, a batch of state governors, led by the NGF Chairman, Governor Abdulaziz Yari Abubakar of Zamfara State, in company of Govs Ambode of Lagos, Ugwuanyi of Enugu, Bagudu of Kebbi attended a closed-door meeting with the president where the financial standing of six states, one each from all the geopolitical regions in the country, were shown to the president.”

According to him, on the president’s request, all the states forwarded their books, revenues, both internally generated and their earnings from the federation account along with their other sources of revenue, “for examination and the president appears satisfied with the governors’ position, thus the decision to set up a new committee”.

Mr Bello-Barkindo said there has never been a time in the country when states have embarked on a more aggressive revenue drive than they are doing today.

“And this is without exception or prejudice to any state,” he added.

“The president at his last meeting with governors (December 15, 2018) had admonished them (governors) to expect harsher economic tides from New Year’s, thus validating governors’ fears that even those states that had hitherto looked comfortable financially, may in the course of the new year, falter,” he said.

He said governors are not under any obligation, by law, to show their books to the NLC.

“But they have, with a view to letting NLC know that what they are asking for is neither realistic nor sustainable.

“Yet, NLC remains adamant that its will must be done, or the heavens will fall. Already, revenue to states has dropped drastically while demands by competing needs keep rising astronomically. Last year alone, revenue to states dropped from N800 billion when the Tripartite Committee was appointed (November 2017) to between N500 billion and N600 billion by the time Ms Amma Pepple submitted its report in October 2018,” he said.

He also said it will be difficult for state governors to dedicate their states’ entire resources to workers’ salaries alone, “knowing that they constitute less than 5 per cent of the nation’s population”.