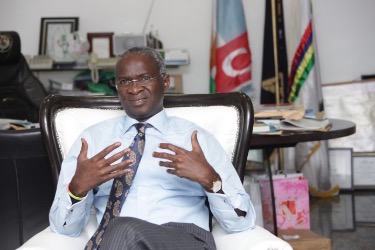 The Federal Executive Council (FEC) has approved the Federal Roads and Bridges Tolling Policy and Regulations aimed at reintroducing tollgates on Nigerian roads.

The Minister of Works and Housing, Babatunde Fashola, made this known to journalists after the weekly meeting on Wednesday in Abuja.

According to Mr Fashola, the policy and regulations were developed after extensive consultations with various stakeholders within and outside the government.

The minister, in 2019, announced that the government had concluded designs for the return of toll plazas on federal roads.

He said at the time that though the government dismantled toll plazas in the past, there was no law abolishing tolls.

According to the minister, a Willingness-To-Pay Survey was carried out to arrive at the recommended pricing framework and existing tolled roads were taken into consideration to arrive at the prices.

“You recall that about two years ago, you had asked me several times here when roads will be tolled. And I told you, there is a lot of work. So we have taken another step.

“ So let me be clear, tolls are not going to start tomorrow. So let us be clear about that. But the big step to actual tolling was taken today by presenting for approval the broad policy that will guide the tolling so that local people, states, local governments, all those who manage roads, investors who want to come in, will know what our tolling policy is. And that will form the basis of their financial modelling, their investment decision,” he said.

He said the tolls will not start until the roads are motorable and this will affect only federal dual carriage roads. The proceeds from the tolls would be used to maintain and construct roads, he said.

He added that most of the dual carriageways also have alternative roads, which are single carriageway which is why the government left them out of the policy.

“We presented and council approved that only dual carriageways of the 35,000 kilometers should be eligible for tolling by the federal government.

“We also got approval that the toll will be used to maintain roads, to construct new roads as they accrue and also to pay the investors who invest in building or completing a road and then take a concession on it. Those are the uses.”

On the billing, Mr Fashola said some vehicles have been exempted. He also announced the fares according to vehicle types.

“Bicycles, pedal cycles, tricycles, motorcycles, and others have two or three wheeled transport use mainly by disadvantaged members of our community, they will be entitled to a fully 100% exemption, as will be diplomatic vehicles and military and paramilitary vehicles.

“So we’ve classified vehicles into five categories – the cars, the SUVs and the jeeps as a second category. Private bus and commercial bus as third and fourth categories. And then luxury buses and trucks as a fifth category.

“Now I think it is important to share with you how we arrived at these prices. Some of these prices were recommended by the operators themselves that I said we met.

“Some of them were also obtained from a survey we did across the six geopolitical zones, talking to households and talking to people in the garages, motor parks and all of that, which was quite extensive. We covered about 17 or so states or 22 states out of the national framework just to get a sampling of what people felt.”