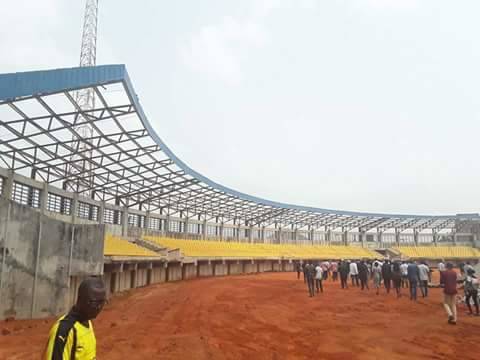 The sum of N1billion released by the Delta State Government for the construction works of Asaba Township Stadium project has been misappropriated.

A reliable source said that the whopping fund had allegedly been misappropriated by the supposedly trusted handlers of the project works.

Investigation revealed that the State Governor, Ifeanyi Okowa had expressed serious anger over the way and manners the project earlier billed to be completed in April, 2018 had abysmally failed, and as such, had constituted a 3-man probe panel to look into the fraud.

One of the Governor’s aides who does not want his name in print, but confirmed the fraud to our reporter disclosed that the committee is headed by a seasoned administrator (name withheld) who is expected to submit his findings within two weeks. It was reliably gathered that those allegedly fingered in the fraud include: a former Sports Commissioner in the State (name withheld), the contractors, among others.

But the Chief Press to the Governor, Mr. Charles Aniagwu in a swift reaction, said the Governor was determined to see to the root of the orchestrated fraud, especially with the purported shift in the project’s completion.

Sources said the contractors in ‘shameless manners’, had last Monday allegedly demanded for the sum of N2.5 billion to enable them complete the project; an alleged demand that had reportedly angered the Governor the more, and had ordered the project completed to specification of earlier date in the month of April, 2018. The Asaba township project was awarded by the state government in the sum of N3bn to enable it host the African Youths Championship Competition in August 2018, and N1bn was released as mobilization fee.

Governor Okowa had told journalists at a recent media parley in Asaba that the hosting of the African Youths Championship Competition will afford the state the opportunity to showcase its potentials in the Africa region.

But further investigation revealed that this was not the first time money approved for the stadium was misappropriated. As it were, the development of Asaba Capital Territory, construction of Asaba International Airport, and Asaba/Ughelli Road Projects’ Funds were allegedly misappropriated by a constructing firm, ULO Construction Company who in reaction, dispelled the story as untrue.

Also, the World Bank Assisted Water Project with funds running into billions of naira, was misappropriated and up until now, nothing has been done to bring the culprits to book.

Oyegun and the Abuja disease By Louis Odion, FNGE