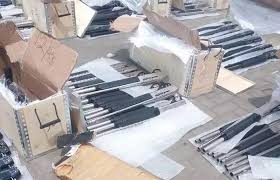 However, one of the sources of illegal gun importation into Nigeria was reportedly discovered few days back by a Special Task Force Patrol team of the Nigerian Customs after a container, which supposedly contained iron doors, but which contained over 600 pump action riffles illegally brought into the country, had been cleared by unsuspecting customs officers and security men at the Tin-can Island Port Apapa, Lagos.

This was seen as another success for the Comptroller General of the Nigerian Customs, Col. Ahmid Ali (rtd.), who has vowed to restore sanity into the system.

According to reports, the Deputy Comptroller of the Nigerian Customs for Apapa Port resumed duty on her new beat on a Monday and the incident occurred on a Wednesday two days later.

Informed sources at the port revealed that the container was cleared to leave the port around 3am of the said day in compliance with the insistence of the Manufacturers Association of Nigeria (MAN) that goods coming into the country should be cleared within 48 hours , which observers said was not enough for proper check.

“When they got to the gate, the security men did not do a proper check and the suspects told them that they would bring the necessary documents the following day and they gave the security men N100,000.

“They proceeded until they got to somewhere around Mile 2, where they ran into a Special Task Force of the Nigerian Customs, which insisted on checking the papers and documents of the goods. They entered the container and saw the steel doors.

“With their level of training, they knew something was wrong, when they saw the body language of the three men as they were jittery,” said our source.

The source added that when the task force officers told the men that they would have to follow them to the customs office in Apapa with the container, they started making offer of bribe ranging between N3 Million and N10 Million, which the officers reportedly turned down as they suspected that the importers were not telling the truth about the goods.

The officers allegedly cocked their guns, when the importers were insistence on the bribe, and kept telling them that the container contained steel doors.

Reports said that on getting to the port, the officers then decided to check the container properly, which was how they discovered that more than 600 pump action riffles were hidden inside the container, and the men were arrested and the was made public through media reports.

We were further informed that all the officers that checked the container initially have since been suspended along with the Deputy Comptroller of the Nigerian Customs in-charge of the port after spending only two days on the beat.