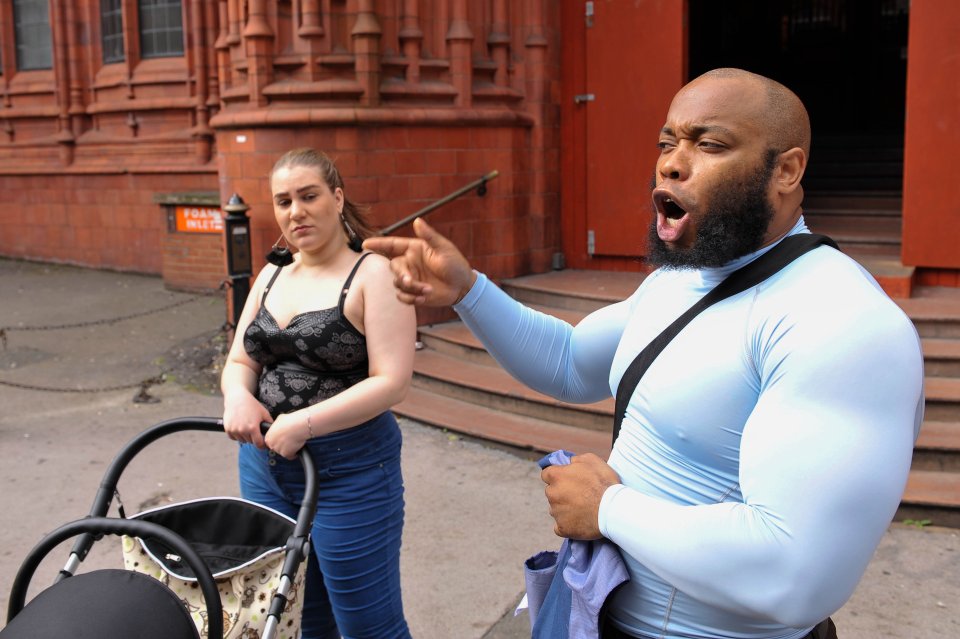 A STREET preacher called a fellow Muslim a prostitute and a slut for wearing tight jeans and vowed to “follow her home and blow her up”, a court heard yesterday.

Jobless Krissoni Henderson, 31, allegedly chanted pro-ISIS slogans at terrified student Noor Alneaimi, 38, along with a group of men in robes, as a crowd of 60 gathered in central Birmingham.

Islamic street preacher, Krissoni Henderson, 31, with his partner arriving at Birmingham Magistrates court today where he is charged with public order offences for allegedly shouting verbal abuse at a woman in Birmingham city centre and swearing at her “for wearing tight jeans”. See NTI story NTIPREACH. September 6, 2016.

She told the city’s JPs: “He said, ‘Look at your tight jeans. You’re a kafir’.

“I don’t think he thought I was a Muslim.

“He kept saying, ‘Satan, Satan. You shall burn in hell’.”

Henderson, of Hockley, who was with his pregnant wife at the time, denies using racially aggravated insulting words or behaviour.

Police arrived at the scene and questioned Henderson at the time, before arresting him the following day.

The hate preacher seized the opportunity to have his say about the charges on Tuesday.

He shouted outside Birmingham Magistrates’ Court: “You treat us like dogs in your country.”

During the hearing, Henderson could be seen pacing around the dock and shaking his head.

At one point during the proceedings, he turned his back on the room to pray.

Prosecutor Simon Brownsey told the court: “It’s the Crown’s case that at the hands of Mr Henderson this woman was the victim of religious and offensive words, including calling her a kafir – a derogatory term for a non-believer.

“(He also said) he would follow her home and blow her up.

“At the time he wasn’t known to her and she has expressed concerns about seeing him again because of the threat.

“She was listening to a Christian preacher on New Street and the defendant was also present.

“He targeted Noor Alneaimi by observing she was wearing tight jeans and told her to take them off.

“He told her she was Satan, she was the devil, she was a slut, she was a prostitute.

“He said: ‘Take off your tight jeans or you’re going to burn in hell, kafir. I’m going to follow you home and blow up your house.'”

Bellowing outside court on Tuesday, Mr Henderson said: “Don’t judge me because I have got a beard.

“Judge me on what I do know.

“That’s what you’re supposed to do.”

He continued: “Let me see what happens when I put on this gown… All of a sudden I am a terrorist now?

“All of a sudden I am a suicide bomber now?

“No. We are not terrorists and we are not suicide bombers, we are loving, peaceful, law-abiding citizens and we live according to the law of whatever country we are in.”

The trial was adjourned.