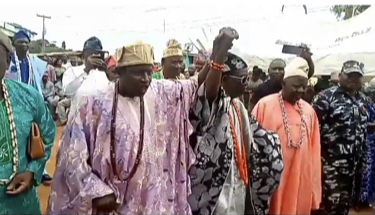 The octogenarian businessman assumed the throne on Saturday following his coronation as the newly-installed Ogunsua of Modakeke, in a ceremony at his sacred palace in Modakeke, Osun State.

The installation rites for Oba Toriola, which commenced in the early hours of Saturday, climaxed with the adorning of the symbolic Akoko leaf on the new monarch.

Speaking with the Sunday PUNCH at the Ogunsua market, Modakeke, where the last rites were performed on the new monarch, Oba Toriola, flanked by his wife, Comfort, said he had persevered in the line of ascension for 43 years before ultimately making it to the throne.He, however, assured his reign would herald a new beginning of success buckled with an all-round development of the community.

He equally enjoined the mutual cooperation of all the great people of Modakeke towards achieving these developmental goals.

Asked how he felt, Oba Toriola said, “I feel elated. I have been in line for 43 years. I am happy. People should expect an all-round development. I will work with all stakeholders.”The royal father succeeded Oba Moses Oyediran, whose death occurred in March this year.

During an interview with our correspondent, a retired Permanent Secretary in Osun State Civil Service, Fatai Kolawole, who is also the Oluomo of Modakeke, said Oba Toriola was well-travelled – with good connection – capable of bringing good development to the community.

“We are happy with the installation of this monarch. He is the 20th Ogunsua. We know he is going to cooperate with the Ooni of Ife to ensure that peace reigns across Ifeland to bring about development,” Kolawole affirmed.

I advised late Osinachi to divorce her violent husband – Producer