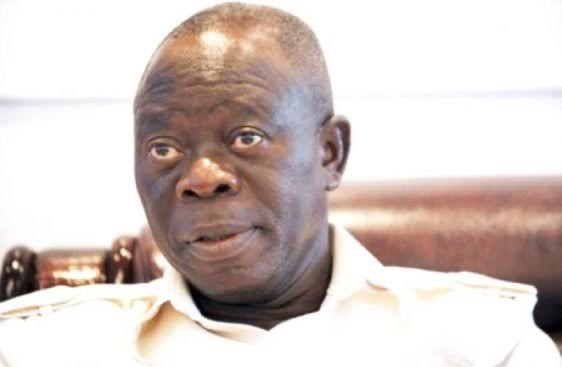 We have been alerted about a Press Statement making the rounds credited to one Victor Oshioke issued on behalf of Comrade Adams Oshiomhole and titled ‘LEAVE OSHIOMHOLE OUT OF APC LEADERSHIP DEBATE’. We initially had our doubts as to the authenticity of the said statement in which the respected Comrade made several unfair and unfounded allegations against Mr. Keyamo, but when we were bombarded by credible sources for our response and after taking our time to send someone to call the author to authenticate it, we had no choice but to set the records straight.
The story of the political tussle between Gov. Godwin Obaseki and Comrade Adams Oshiomhole in Edo State is so well documented that we do not need to remind Nigerians about it. Mr. Keyamo had ABSOLUTELY NOTHING to do with it. The cases they filed against each other raged from Benin to Abuja and other parts of the country. Mr. Keyamo NEVER filed a single case in court, nor was his Chambers or juniors in Chambers used in any of the cases. The records are there.
When the crises finally consumed Oshiomhole, Mr. Keyamo was not in any strategic legal position like the office of the AGF, APC legal adviser or an SA to any high office within the system on legal matters. Mr. Keyamo is not PRIVY to how members of the CECPC were nominated and/or selected, so he did not have the benefit of the opportunity to point out any legal disabilities. Regrettably, the respected Comrade must have have given in to gossips and rumors.
As to the unfounded allegation that Mr. Keyamo released his recent legal opinion on the Supreme Court decision in Jegede V. Akeredolu to the public on social media, nothing can be farther from the truth. Out of pure patriotism, Mr. Keyamo sent his PRIVATE AND CONFIDENTIAL ADVICE to no other person but the National Chairman of the CECPC himself and just three other highly placed persons with a note not to forward it to anyone. It was an honest, sincere and selfless advice IN THE LIGHT OF THE JUDGEMENT of the Supreme Court ON THAT DAY. However, since it was leaked and seeing how it has been politicized, Mr. Keyamo has since refrained from making any further comments on it.
For the avoidance of doubt, Mr. Keyamo has no personal interest to serve. He is very content with the assignment given to him by Mr. President and is very much ready and willing to return to his thriving legal practice whenever his assignment is over. He is not struggling with anyone for anything other than to enthrone justice and fairness within the system. He has climbed the highest ladder in his chosen profession before being called upon to public office. As such, public office is not a do-or-die affair for him. All insinuations in Oshiomhole’s release that Mr. Keyamo is after some PERSONAL gain is pure balderdash.
Mr. Keyamo is a big fan of Gov. Buni and they both continue to have healthy conversations till today over the issues at stake. This is not a personal issue. It is just for the survival of the party and Mr. Keyamo will always defend and support the CECPC to the end unless the Supreme Court says otherwise if and when the Court has the opportunity again to decide with the proper parties before it. He will continue to pray for victory on our part. His only offence now is that he sounded a private note of caution because of recent developments at the Supreme Court. How someone can interpret that to be hostility still beats our imagination.
Mr. Keyamo holds Comrade Adams Oshiomhole in very high esteem. He regards him as his leader and mentor. That outburst was very unnecessary and we think he succumbed to the emotions of the political disappointments he has suffered lately, especially in Edo State. If he is looking for a fall guy, he should please look elsewhere. He should be rest assured that we all share in the pain of that costly political miscalculation that caused our dear party to lose the State to the Opposition so cheaply. But we shall continue to support all efforts to put things back on track there.
Thank you.
Tunde Moshood,
SA (MEDIA) to the Hon. Minister,
Wednesday, August 11, 2021
Related Topics:
Up Next