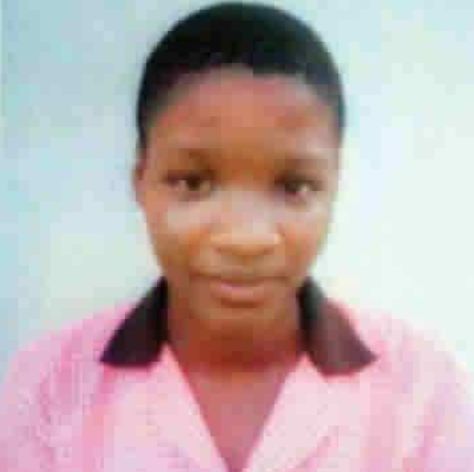 The girl identified as Asmau Ajibade, went missing for seven days after she left home for school.

She lived with the guardians, Alhaji Rauf Adetona and Alhaja Ajarat Adetona, at OPIC Estate, Agbara, off Lagos-Badagry Expressway, Ogun State before she reportedly disappeared.

Ajibade it was learnt had left the house at about 7.30am in her school uniform. The belief in the house was that she had gone to school. The guardians became apprehensive when it was 4pm and she had not returned home. Record of the school reportedly revealed that she was absent that day.

According to Punch, Ajarat said the girl had been living with them since she was four years old, adding that she was surprised by her disappearance. She said it was the first time she would leave home without returning.

She said, “She went to school on Monday and has not returned. Her teachers told us that she didn’t come to school that day.

“But a cobbler around here told us that he fixed her torn sandal that morning. The cobbler said she seemed to be in a hurry as she told him that somebody was waiting for her.

“She had never done anything like this, although her teachers had told us that she was keeping bad company; and I warned her to stop associating with bad people.

“Her parents had divorced. His father died while she was six months old. She had been living with us for 11 years now. Her attitude that morning did not show that she planned to do anything.”

Rauf said he was on his farm when a call came in that Ajibade was missing. He said they were told at the school that Ajibade might have absconded with some of her school friends and the incident reported at the Agbara Police Station.

He said, “She always prepared the food she would eat at the school and did same that morning. My wife gave her money in addition to the food and she thanked Alhaja and left. I went to my farm around 9am. At about 4pm, my wife called me that Asmau (Ajibade) had not come back home.

“I told her to be patient because she came home around 3.30pm at times. When it was 5pm, she called me back and said she had gone to Asmau’s school, but she didn’t see her.

“On Tuesday, we went back to the school. The teachers at the school told us that she had become a wayward girl and had been moving with a friend who had been expelled from the school.

“We reported at the police station on our estate and we were told to come back on Wednesday if we didn’t see her.

“On Wednesday, we were directed to the Agbara Police Station. The police collected her picture from us and promised to radio other divisions. They said she might have eloped with a boy.”

However, the girl was rescued last Saturday while living with a guard identified as John who is her lover in the Agbara area of Ogun State. John was apprehended along with a cobbler, Moses who hooked the girl up with John.

One of the guardians, Alhaji Rauf Adetona, said Ajibade confessed that it was the cobbler who hooked her up with John, adding that she spent four days with the lover.

He said, “When the cobbler saw your  report on her disappearance, he informed John. When John tried to return her to the estate, she fled. She spent four days with John. We found her school uniform with John.

“A family friend saw her in Oko Afo, Badagry, and called us. She wanted to run away from him because she knows him. But the man lied to her that he would never tell us.

“They agreed to meet somewhere in the community the following day and that was how we found her.

“She took us to the house where John works as a guard and said it was Moses who hooked her up with John. The police have arrested the two of them.”

“The girl has been reunited with her guardians and the suspects arrested. They will be arraigned for abduction,” he added.
Related Topics:
Up Next