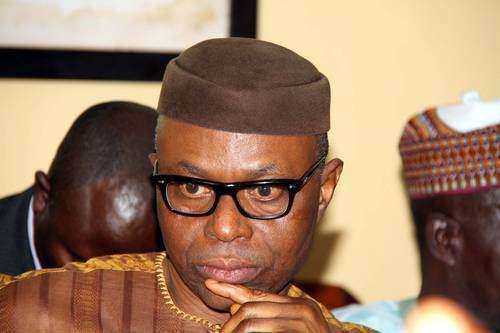 Former Governor of Ondo State, Dr. Olusegun Mimiko, on Thursday, explained why he joined the presidential race on the platform of the Labour Party in the 2019 general elections.

His declaration speech was entitled “Because We Care”.

According to him, “There comes a moment in the life of a nation when every patriot must stand up to be counted! At such a moment, no person worthy of a place in history can afford to remain ensconced in their comfort zone.

“When the totality of our being and the very essence of our humanity are in violation, patriots must advance to recapture the present; and commit to re-defining the future. For our country, Nigeria, the moment is now!”, Mimiko told a gathering of party leaders and stakeholders at the LP National Secretariat, in Abuja.

“It is time to all march out and recall our past, take charge of the present, and launch out into greatness, as one inclusive, cohesive family. It is within the foregoing context that I situate myself.

“It is the reason why I find it so compelling to humbly declare today, my decision to seek election into the office of president of the Federal Republic of Nigeria in 2019.”

“I know this because anywhere Nigerians find themselves, no matter the situation, we always rise above adversity. We don’t just survive, we thrive. It is high time we replicated over our country, that indomitable spirit of Nigerians, that spirit of accomplishment, which has made stars of individual Nigerians all over the world.

On restructuring of Nigeria, Mimiko said “I once again, hereby commit wholeheartedly to leading the process of restructuring Nigeria.

“I say this not as a cliché. Rather, this is a commitment that derives from a deep conviction that there is really not much we, as a people, can do even in the best of times, to place our country on the global cutting edge of development, for as long as it remains shackled and ensnared by a centralized governance structure that is the 1999 Constitution.

“It is indeed only in the context of a restructured system that the hope for a strong, stable and functional Nigeria lies.

“As governor of Ondo State for eight years, I saw first hand what limitations the federating units are confronted with, in the unitary system of government that we operate, which we wrongfully refer to as federalism. From security administration, through taxation, to investment in infrastructure, many of the things taken for granted in several federal climes, the basis of their vitality, are denied under our 1999 Constitution (as amended).

“This makes it practically impossible for state governments to be anything other than pitiable adjuncts of an overbearing central government. It is from the anvil of such practical experience that my commitment to Restructuring was further sharpened. It is noteworthy that the redeeming cry now is, restructure and safe the nation!”

On insecurity and wanton killings across the nation, Mimiko said “there is also no denying the fact the centrifugal forces that seek to tear our nation apart have been greatly strengthened in the past few years.

“One cannot but mention in this regard, ongoing killings all over the country, but especially in the Middle Belt. The attendant devaluation of life is constantly expressed in unmistakable cheapening of human life in our cities, towns, and villages.

“Nigerians have now almost completely lost their sense of outrage over the taking of human lives, as we can see in the heightened but evil commitment to ritual killings, kidnapping-related killings, unprecedented violent robberies, and sundry activities of emergent street gangs.

“We must also fully interrogate the nature of the ongoing massacres in the Middle Belt and elsewhere across the country. It is particularly worrisome that a systematic demographical reconfiguration is underway in our country. The class content of the massacres must also not be lost on us.”

In his reaction to the declaration, National Chairman, Labour Party, Alhaji Abdulkadir Abdusalam (Paladin Paiko) said Nigeria can restore its glory and reclaim its greatness if Mimiko is given the opportunity to lead Nigeria.

APC has declared war on us – Adeleke cries out