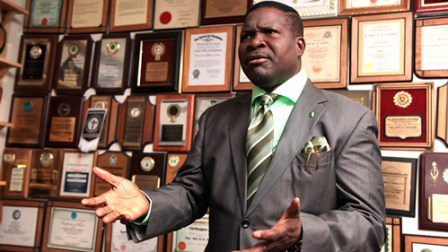 A mild drama played itself out on Monday in Lagos at the 14th Gani Fawehinmi Annual Lecture when protesters mobbed Mike Ozekhome, a Senior Advocate of Nigeria and prevented him from mounting the podium to speak.

According to report by the News Agency of Nigeria (NAN), the protesters comprising youths, shouted down Ozekhome and physically restrained him from entering the venue.

The angry youths accused the senior lawyer of defending corrupt individuals in court and shielding them from justice.

“His presence here is an insult to the memory of Chief Gani Fawehinmi,’’ the mob chorused.

The keynote address of Demola Popoola, a professor, had to be stopped for 15 minutes because of the pandemonium.

It took the intervention of Mr Adeshina Ogunlana, the Chairman of Ikeja Branch of the Nigerian Bar Association (NBA), Mr. Femi Falana (SAN) and Mr. Mohammed Fawehinmi to douse tension.

Mohammed, the first son of the late Fawehinmi, told the protesting youth that violence which would have been disapproved by his father, was not the right approach to address issues.

But an unperturbed Ozekhome, who later addressed the forum, said: “Gani was against oppression, repression and tyranny in whatever form.

“That is why in 1983, the NBA said that lawyers should not defend alleged corrupt politicians under the then General Muhammadu Buhari to fight corruption, but Gani said No; these people are entitled to their rights.

“By Section 36 of the Constitution, every person’s innocence is presumed; I was with Gani when we were defending the so-called corrupt politicians.

“I am just coming now from the court where the Economic and Financial Crimes Commission (EFCC) wanted to freeze the account of a citizen via ex parte.

“I just stopped them again for the 20th time, I will continue to fight the government which looks the other way when corruption is recorded in their system.

“I have told Mr. (Ibrahim) Magu three times to prosecute at least one person in their government so that we can show that corruption is being fought,’’ he said.

Ozekhome, who was a senior counsel in the law chambers of Fawehinmi, noted that during his stint at the chambers, he helped found the Nigerian Weekly Law Reports and the Civil Liberties Organisation (CLO).

“The Shiites that were mowed down during their protests, the massacre in Southern Kaduna, Enugu State and so many other incidents are as a result of lack of true federalism and restructuring,’’ he said.

Responding to the shouts of “lies, lies, lies’’ that punctuated his speech, the senior advocate told the protesters: “You cannot intimidate me, you are all hired.’’

Reacting to Ozekhome’s claims of Gani defended corrupt people, Falana told the Edo-born lawyer; “Go and find out from your history books, Gani never defended anyone being tried by the EFCC or ICPC, I need to correct that misconception.”

Ozekhome has been a counsel to the former First Lady, Patience Jonathan, the Senate President, Bukola Saraki, and Ayodele Fayose, the Governor of Ekiti, all having various corrupt allegations weave around them at one point or another.

A students’ group,  Alliance of Nigerian Students Against Neo-liberal Attacks (ANSA), has rejected the choice of Ozekhome as a contributor by the Nigerian Bar Association at the Fawehinmi Memorial Symposium tagged ‘Fawehinmiism, The 14th Edition”.

The theme of this year Gani Fawehinmi Lecture is “Federalism, Restructuring and Good Governance: Striking a Balance”.

The group made its position known in a statement signed by Mr. Adeyeye Olorunfemi.

ANSA said it considers the choice of Ozhekome as an unforgivable insult to the memory of the late Chief Gani Fawehinmi, adding that it ridicules all that the late human rights lawyer/social crusader represented and stood for.

“We forthwith hold that individuals whose political lifestyle and deeds have enormously contributed to the immeasurable ruin and aggravated hardship of Nigerian masses have no business discussing the conditions upon which the impoverished masses would be liberated,” said ANSA.

It explained that it found it shocking that Mr. Ozekhome has been invited by the Ikeja Branch of the NBA as a contributor to the theme ‘Federalism, Restructuring and Good Governance: Striking the Balance”.

“We are appalled at the choice of Mike Ozekhome among the pool of intellectually sophisticated and pro-masses legal practitioners such as Messrs. Femi Falana (SAN), Olisa Agbakoba (SAN), Jiti Ogunye,  Malachy Ugwummadu, Femi Aborisade and other frontline human rights lawyers, who have shown over time to be worth their salt in the not so Herculean task of using the legal system, however moribund, to advance the cause of the oppressed,” stated ANSA.

The group noted that Ozekhome has been using the legal system to defend politicians accused of corruption.

“You would recall that this self-acclaimed human rights lawyer had, in time past, defended the anti-poor and corrupt politicians such as Ayodele Fayose, Olisa Metuh, Madam Patience Jonathan and even the lawless lawmaker and Senate President, Bukola Saraki, whose 8th National Assembly is peopled by characters who passed only N50 billion  into the education sector and N51 billion into the health sector, whereas it mobilized about N125 billion to feed the greedy stomachs of its 469 members,” ANSA said.

The group further said that the measly funding of education, arbitrary fee hikes and poor welfare conditions are attributable to the ineptitude of the ruling class whose interests Ozekhome represents. ANSA added that over 45 student activists, who fought against poor funding of education, have been illegally rusticated with neither the NBA nor Ozhekome lifting a finger to help.

Whereas said the students’ body, the late Chief Fawehinmi famously stood in defence of politically victimized activists and spent his entire lifetime fighting all the type of people  Ozekhome defends.

ANSA called on the NBA to withdraw the invitation to Ozhekome and if that does not happen, wants the NBA to be ready to face lawful protest over its choice to ensure that the late crusader’s name is not rubbished by the presence of elite-supporting figures like Ozekhome.