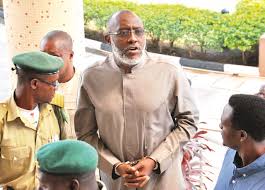 The Economic and Financial Crimes Commission on Friday amended the charge of destruction of document against Olisa Metuh, the Peoples Democratic Party National Publicity Secretary.

The charge was amended at the resumption of the proceeding by its Counsel , Sylvanus Tahir at an FCT High Court presided over by Justice Ishaq Bello.

Tahir said the third-count of Mischief contravened Section 326 punishable under Section 327 of the Penal Code.

Testifying in the case, an EFCC witness, Mr Junaid Said, told the court that Metuh tore the commission’s document.

Said, a Special Task Force Team member of the EFCC, led in evidence by Tahir, said that the team received a petition in January, 2016.

He said that the petition was from the office of the National Security Adviser (NSA), retired Col. Sambo Dasuki, which alleged that he transferred N400 million to Destra Investment Limited, a company owned by Metuh.

The EFCC witness said investigations revealed that the transfer was done without any contract approval.

He said the team visited the resident of Metuh at Prince and Princess Estate, Abuja, on Jan. 5 and invited him to the commission.

The EFCC witness said the defendant volunteered a statement to the commission.

“My Lord, when he concluded writing his statement which was on four sheets of the EFCC statement form, I collected the statement and read over it, I then handed the statement over to my superiors Musa and Wetkas.

“When I was handing over the statement, the defendant said he was surprised that he had written that much and that he felt he had given too much information.

“Because of the comment, I was worried I gave him the statement sheets one after the other for endorsement,’’ the witness said.

He said Metuh endorsed the first and second sheet, but tore the third sheet.

The witness told the court that the third sheet was where Metuh disclosed that he received the money for PDP political activities, settle his personal needs and made reference to former President Goodluck Jonathan.

“My lord, he suddenly tore the statement sheet into pieces, in great shock and surprise I stood up I asked him why he did what he did?

“He said he did that because he was no longer willing to give the information on that statement sheet.

“I then requested the pieces of the statement, he declined and attempted to put them in his pocket, I then cautioned him and told him to respect himself he insisted that he was going to dispose the tore sheet.

“I persuaded him to handover the tore sheet and brought one plain paper before him, he poured the pieces on the plain sheet, my other colleagues were there looking at us in surprise as well.

“He furthered tore them into pieces, saying only in the movies would this be recovered.

“I poured the pieces in the commission’s transparent polythene bag for exhibit and made entry of the incident into the EFCC’s incident duty station diary as well as EFCC’s pocket notebook.

“Later, in the day he requested to make additional statement, which he made, wrote his name and signed but declined to make any other statement on the tore paper.’’

The EFCC’s incident duty station diary, EFCC’s pocket notebook and the tore pieces were tendered and admitted as exhibits.

Said admitted under cross examination by Mr Onyechi Ikpeazu (SAN), Metuh’s Counsel that the issue of the tore sheet was not written in his statement.

Ikpeazu demanded for the witness statement, but the prosecuting counsel gave him a photocopy of the statement.

Tahir said that the defendants should have served him with notice to produce the document.

Bello said the matter could no longer proceed without the original copy of the witness statement.

“Documents must meet the status as required by the law, there must be a certified copy of your documents.

“It is a healthy practice to produce the documents in your custody, especially in a criminal trial,’’ Bello told EFCC.

Bello adjourned the case till March 16 for continuation. (NAN)

Related Topics:EFCCMetuh Olisah
Up Next