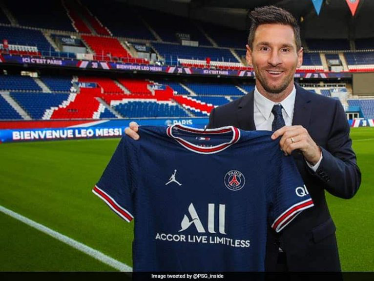 Lionel Messi is determined to “build something special” at the Parc des Princes after signing for Paris Saint-Germain (PSG).

The former Barcelona star, who scored 672 times in 778 appearances for the Blaugrana, was expected to sign a new contract at Camp Nou, but financial complications forced him out.

Mauricio Pochettino’s men promptly swooped in to seal one of the most momentous signings in history, confirming the deal on Tuesday.

Upon completing his move to the French giants, Messi said: “I am excited to begin a new chapter of my career at Paris Saint-Germain. Everything about the club matches my football ambitions.

“I know how talented the squad and the coaching staff are here. I am determined to help build something special for the club and the fans.

“ I am looking forward to stepping out onto the pitch at the Parc des Princes.”

The 34-year-old also collected his first international honours in July as he fired Argentina to their first Copa America success since 1993.The Argentina captain links up with former team-mate Neymar to create a formidable trio with Frenchman Kylian Mbappe.

Mbappe was rumoured to be heading for the exit door with 12 months left on his current contract but Messi’s arrival will likely encourage the 22-year-old to discuss signing a new deal.

With the addition of Gianluigi Donnarumma, Sergio Ramos, Georginio Wijnaldum and Achraf Hakimi, the club will now look to reclaim their Ligue 1 crown, before thinking of the Champions League trophy.