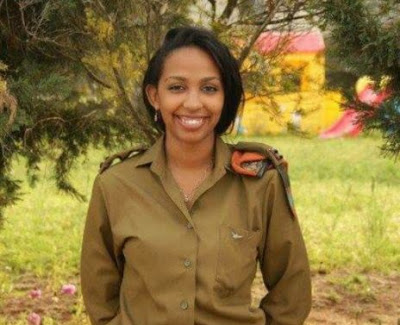 21-year-old Cohen was born in Nigeria to by Nigerian mother  and an Israeli father. She was living with her parents and sister in Kano, before she migrated to Israel.

She said: “I always wanted to come to Israel, ever since I was a child, I wanted a deeper connection, to understand what ‘Israel’ is, and not just through stories.”

Despite the fact that moving to Israel was dream come true for the young woman, it was still hard for her to adjust to the life in the country initially. Her words:

“New immigrants are often embarrassed and ashamed to speak, because they may say something wrong and I was one of them but at some point I realised that I couldn’t go on like this.

I made a lot of mistakes along the way, and it was hard, but it was worth it.”

She learnt Hebrew and her friends helped her to adjust into the Israeli society. According to Cohen, her father was happy about her decision to become an officer in the Israeli army.

The female soldier’s father was also an officer in the Israeli army.

She said: “He was just as emotional as I was. For him it was a dream come true, and his being there really helped me.” “My mother and my entire family attended the officers’ graduation ceremony.

It is very touching to be the first woman officer from Nigeria in the IDF. Obviously I have fallen in love with Israel. This is my home and I see myself continuing my life here.”

Cohen served as an operations sergeant in the Homefront Command and was later accepted into the officers’ training course.

How True? Gwarzo Pocketed Over N100m From SEC as DG