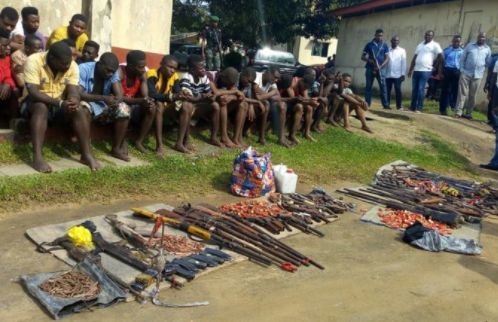 A married man who wanted to have ‘play a quick one’ with the lover has landed in serious trouble after the alleged lover he took to a hotel room died in mysterious circumstance.

The Cross River police command paraded 72 suspected criminals apprehended for various offences and the man was paraded along wit them. Some of the he offences allegedly committed by the criminals include murder, kidnapping, armed robbery, internet fraud and others.

“It is the command’s determination to squarely surmount the daunting security challenges across the state which is the tourism hub of the federation especially as we are approaching the yuletide period” he added.

Inuwa said “there is no doubt that Cross River Police Command has made tremendous achievement in crime fighting ,prevention and control as well as maintenance of law and order within the period under review “.

On his part, the married man, Obiugo Nnoli, said he was only trying to secure a loan and their meeting was only to discuss modalities for him to get her the loan.

He said “I have known Elizabeth for about five years and I only want to secure a loan from LAPO microfinance Bank before she suddenly collapsed in the hotel room”.

But sources say the lady (Elizabeth Friday) was alleged to be three months pregnant and died during s*x with her the man in the hotel room.

How True? Gwarzo Pocketed Over N100m From SEC as DG