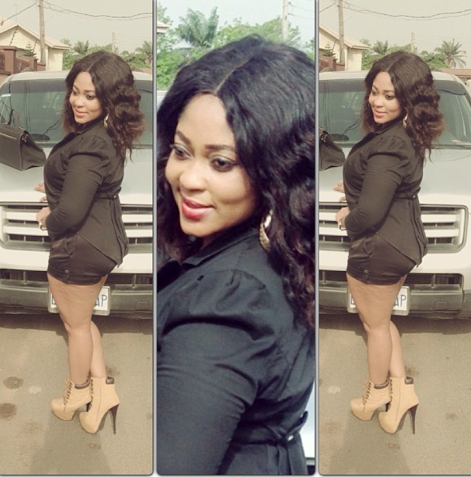 The beautiful actress was almost pushed out of the industry she chose as a career by some marketers, who decided not to feature her picture on movie jackets unlike what they were doing in the past. This led to her neglect by producers and big players in the industry and she almost quit the job then.
But, the passionate actress later bounced back and today, Biodun Okeowo (Tolani Osinrin) is doing well as an actress and producer.
She speaks on her career, experiences, piracy and other issues of interest in this interview she granted us recently.

What attracted you to Nollywood and acting
generally?
Actually, it happened that my mother didn’t want me to be an actress, she felt actresses were diabolical. She said that acting was meant for the people of the world, but my father was an actor with the likes of Prince Jide Kosoko in ‘Awarawa Theatre Group,’ so acting is in my blood. The drive to become an actor was not motivated by anybody, but it was something I have love floor.

How has it been so far?
It has been bad, rough and good.

Any bad experience or embarrassing moment, and when did you start acting really?
I started 10 years ago (oh my God), I didn’t even know it is up to 10 years that I started acting.

Have you had any low moment since you started acting?
That was when I had problems with marketers and jobs were not coming for me anymore. I felt like leaving the industry, but prayers kept me going. I remember that even if I played  a lead role in a movie, marketers would not put me on the jacket of the movie and if they try to put it there at all, they would put it in a very small place at the back of the movie jacket. You can imagine this for someone that had been there before then and who had hit covers of movie jackets and who is now being relegated to the back of the jacket, I felt like quitting and I wondered what was happening to me. So, jobs stopped coming to me due to that and producers stopped calling me for roles. They felt that since I had been relegated to the background by marketers, it meant I was no longer relevant in the industry. Even my friends that were calling me for jobs stopped calling me and I felt bad such that I would be in my room and I would be crying all day and paying the school fees of my children became very difficult for me. I felt like quitting the industry, but my prophet in the Celestial Church, which I attend, told me that it would be fine, and glory be to God, things became better later.

How did you start in terms of fees and what are your charges now as an actress?
My first film was ‘Oro Oka,’ produced by my boss, Lasun Ray, I wasn’t paid for the job because I was under training then. But the first film that fetched me money was the one produced by Bimbo Oshin entitled; ‘Temi Yemi.’ She paid me N5,000 and it was a huge money to me then in 2007 because I earned money for my sweat for the first time in the movie industry. I actually sneaked to the set because while training, we were not permitted to go to any location without permission from our boss. That was the first location that I sneaked to because I don’t have the mind to disobey my boss. I fear a lot, I did about three scenes on the film and Aunty Bimbo came to gave me an envelope that contained the money and I was shocked. After that, I finished my training and the money started coming. But, I won’t disclose what I earn now because in the Yoruba movie industry, we have family ties, so we bend our rules sometimes for people that are close to us.

Why are you not acting in English Nollywood as an educated actress?
May be I have not given it a thought. Charity begins at home, I don’t see myself as a star or celebrity, I believe I still need some experiences to go out, I believe I am still at home in Yoruba Nollywood. I don’t want to go there and someone would. send insult back to where I am coming from and castigate me as a Yoruba actress. I still want to have more confidence in myself, so when the time comes, I could go out there and cross over.

What is your experience on sexual harassment in the industry?
I have never been harassed sexually since I got to the industry because I started from the right source. Then, we were not permitted to go to locations that they don’t know about, so where would anybody see me and harass me. So, by the time I got into the industry fully, I was already a producer and this comes with being ahead. With this, it was difficult for anyone to harass me. The harassment should have come during training, but since I was with the right crew, I was lucky I was not harassed and I can say that anywhere, anytime.

Have you had any embarrassing or lovely moment going out there as a star?
I don’t see myself as a star and I do things that I ought to do not minding being an actress. I could park my car by the road side and go down to buy a corn, I could go on ‘okada’ to where I could get a cab for an outing if my driver is not around and I don’t feel like driving. The first embarrassing moment I had happened before I was known. I was going somewhere around Fadeyi area in Lagos after my first popular movie and a lady said ‘look at Tolani Osinrin,’ which was my name in a film. She was so excited, but her friend that was going with her cautioned her and said, ‘who is ‘Tolani Osinrin,’ is she a star’, I was rooted on the floor after she said that. I had not experienced recognition then and I waited to greet her unlike now that I would just wave and go. I was ready to hug the lady until her friend took her away. The other incident happened around in a motor park in Ikorodu area of Lagos, where some boys wanted to collect money from me as I was driving to a location. Unfortunately, I  didn’t have much money on me and one of them came to the side of the front passenger’s seat and I gave him some money and Itold him to share it with his friends, but he collected the money and ran away. The next thing was that the rest came and started hitting my car with a cane. If the car was human, it would shed blood that day. Actually, they don’t normally harass women, they harass our men most.

How do you cope with scandals as a star?
I had two, one with an upcoming actress and the other one was written by a reporter in a magazine. They actually wrote a rejoinder because I sued them to a court of law.

What else do you do apart from acting?
I am a business woman, I have a beauty shop, and a beauty spar. I used to have a wine shop and I am planning to re-open it.

How do you think the government can help the movie industry?
They should come to our aid in terms of location. Imagine a star actor going to get a location and he is being insulted, you would feel so bad. We improvise a lot and this is affecting the quality of our movies. For instance, you cannot make use of a bank, when you want to shoot a bank scene. If the government supports entertainment, the establishments would support us. You want to make use of the airport or some government owned areas, but you are denied, the government should come in and help us. They support football, but movies is doing much more than football because, when you are depressed and you watch a comedy movie, you would laugh and you would be relieved.

What is your view about stereotype?
I don’t like it at all. I was being stereotyped as an armed robber because I started with such an act and they started using me for such a role and everybody began to wonder why I was always carrying guns in films. So I had to reject the roles and I started acting other roles. There was a time they stereotyped me with the role of a prostitute. I had to complain again, and by the time I started acting armed robber role again people were wondering why I was doing that since I do not fit into the role again. Stereotyping is not challenging at all, an actress should be challenged, your leaders should challenge you.

Have you had cause to reject any role and what is your on indecent dressing in films?
I can wear any dress in films, but sometimes, our culture does not support indecent dressing, but this is a new era. I can cover my head, without putting on earring. Also, I can dress seductively and I can also dress decently depending on the role I am playing.

Is there any role you cannot act?
I cannot act nude, I have rejected a role I didn’t like in the past. For instance, I had acted the role of a lesbian in my film that was yet to be released and a producer wanted me to act something close to that and I said I could not do it because my own movie on the role had not come out then.

Related Topics:Biodun Oke owo
Up Next

The Return Of Actress Funke Adesiyan