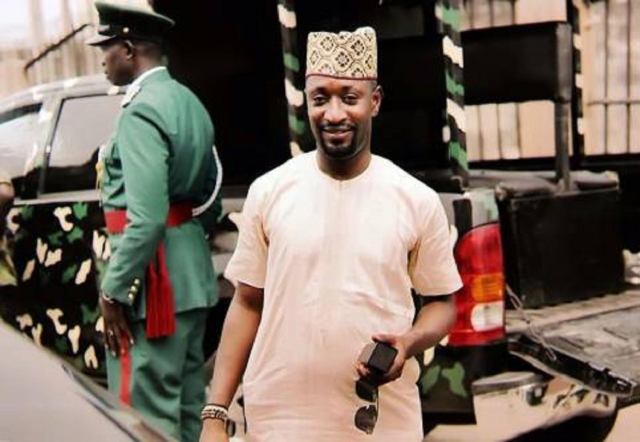 More facts have emerged over an offence reportedly committed by the man, who allegedly used a phone number with the name of President Muhammadu Buhari’s daughter Hanan, on it to perpetrate criminal activities have begun to emerge.

It was gathered that the suspect, who has since been released by the Department of State Services (DSS), is not a fish farm investor as he had claimed, but a labourer who is paid on a daily basis by the owner of the fish farm.

Documents exclusively sighted by a national newspaper revealed that the suspect, Okolie Ifediukwude Anthony, a native of Umuezei Quarters of Asaba, Delta State, was working in a small fish farm owned by one John Freeman in Otuogwu and paid a daily wage by the owner before he was caught for using the phone for criminal pursuits.

The document also showed that before he ventured into the fish farm business, Okolie Anthony was involved in betting game business, which he later gave up on the grounds that it was not profitable.

“I did sales of recharge with my sister now married for a while before my uncle opened a betting shop for me to serve as an agent from 2016-2018. I later sold the shop because the business was not moving and was not bringing profit,” Okolie confessed in the document.

“I am currently searching for job but managing a small fish pond with Mr John Freeman in his compound located at Otuogwu, Asaba, Delta State and paid a small amount of money each day I visit the farm and also help out in doing some writing for the owner since his age does not allow him to hold bird and write,” Okolie said.

On how he came about the SIM that bears the name Hanan Buhari, Okolie said he bought the Subscribers Identification Module, SIM, from a roadside shop in Asaba having misplaced his previous number without knowing that the original owner had the name registered by the service provider.

Okolie confessed however that he was shocked to discover that each time he made calls with the number 09035666***, the true caller would indicate ‘Hanan Buhari’, a situation that made him plan to report to the service provider, to ‘rectify the problem’ but he never reported until he was arrested.

It was found out that Okolie actually ran into trouble with security agencies after he started posing as a woman and pretending as if he was Buhari’s daughter and original owner of the SIM all in a bid to curry favour from unsuspecting members of the public.

Okolie, records show, began to make brisk business once he discovered that the phone number he was holding was more of a ‘goldmine’ and consequently began to solicit financial assistance from key Nigerians who knew the first family’s daughter.

Findings show that one of the personalities Okolie called with the number and solicited for cash assistance became uncomfortable with the voice, which he suspected was not that of a woman even though the true caller showed the owner to be that of Hanan.

Okolie confessed: “I was arrested on July 21, 2019, after I had used the phone to chat with an unknown number which I asked for financial assistance and the man promised to assist me but I never talked with him again because I did not know who the person was.”

A source close to the service provider, who issued the controversial SIM to Okolie, confirmed that the number was validly issued to Okolie after it was duly retrieved from the original user having been dormant for a long time in accordance with industry practice in order to keep its subscribers base healthy.

The source said that the company was however not responsible for the intentions to which the subscriber deployed the SIM and should not be held accountable for such as its responsibility ends with the issuance.

It will be recalled that certain groups and individuals had recently claimed that Okolie was about to commit suicide having been forced to abandon his wife and fish farm business due to his arrest and detention for 10 weeks, during which he said he was well treated by the DSS.

Contrary to claims that he was about to lose his wife, the suspect submits in the document: “I am single, Christian and self-employed and currently searching for a job.”

Did Bakare Shoot Himself In The Foot By Femi Akintunde Johnson