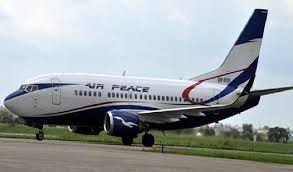 A yet-to-be identified man has been arrested for climbing a moving Air Peace flight at Murtala Muhammed Airport in Ikeja, Lagos.

In a statement, the airline said the man hid himself in the bush before running to mount the plane on Friday morning.The plane was heading for Owerri, when the man, in his twenties, mounted the flight and attempted to force his way in.The pilot of the aircraft was notified by the pilot-in-command of a private jet coming behind it. Security operatives were immediately notified and the man was arrested.

When asked why he committed the act, the man said he thought the plane was heading overseas.“This morning, at exactly 9:10 at the MMA1 Lagos, an Owerri – bound Air Peace aircraft was taxing towards the threshold for take-off, when a man, in his twenties, emerged from the bush along the runway and tried to gain access into the aircraft through the wheel-well,” the statement read.

He is currently in the regulator’s custody. When interrogated on why he took the action, the man stated that he thought the aircraft was headed overseas.”In July, a man found his way to the Lagos airport and climbed a Port Harcourt-bound Azman Airlines plane.The man was later identified as Usman Adamu from Republic of Niger.