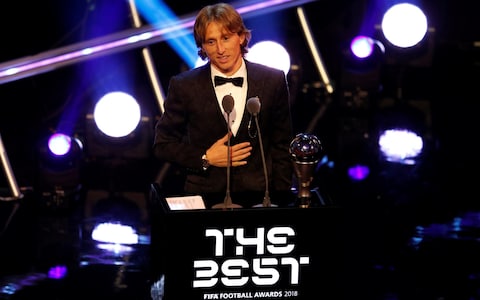 Finally, the era of Cristiano Ronaldo and Lionel Messi snapping up every individual football honour is over, and the man who broke the jinx is Real Madrid’s Luka Modric.

Fresh from winning UEFA men’s player of the year award in August, the diminutive Croatian playmaker known for his long-range strikes and accurate passes added the FIFA Best men’s award on Monday.

The 33-year-old former Dinamo Zagreb youngster has excelled where midfield greats, Xavi Hernandez and Andres Iniesta, failed. The latter duo tried but failed to win individual awards at the expense of Messi and Ronaldo.

Modric is a worthy winner for his stellar 2018 which surpassed the achievements of the likes of Mohammed Salah and Ronaldo himself. Both these players scored goals in abundance but are just the finishing article in their teams’ styles of play. This is moreso evident in Ronaldo’s case, who might not have scored his 15 Champions League goals without the playmaking genius of Modric, neither would Real Madrid have won three UCL crowns on the bounce.

Modric began showing signs of dislodging Ronaldo at the beginning of last season by winning the best player award in Real’s World Club Cup triumph in December. Although he had just one goal and assist in the UCL, Modric was the chief instigator of most Madrid attacking plays with pin-point long-range passes which sliced the midfield and defence of most teams before the likes of Ronaldo and Bale would finish them off.

His vision bailed out Real Madrid in tight encounters, one particular highlight was against Bayern Munich in the semi-final where the Germans had Madrid on the ropes for long periods and without Modric, who played 14 of 15 UCL games last season, Real would not be in the final. The peak of his stellar performances in club colours was in the UCL final where he took the game away from Liverpool, bossing the midfield with his many short and long passes, calming the storm after Liverpool equalised before knitting the team together for the kill, to the admiration of the media and pundits.

It was at the 2018 World Cup in Russia that Modric would get his due recognition as the captain and leader of a talented Croatia team. He began the mundial with a goal against Nigeria in the opener, but it was against Argentina that Modric’s qualities shone, even in the presence of Lionel Messi, whom he made look ordinary. He bossed the entire game, dictating play throughout while chipping in a trademark long-range strike and another assist in the 3-0 humbling of the Albiceleste.

He continued his impressive performance in the knockout phases where Croatia had to come from behind in the round of 16, quarter and semi-finals to make the final where they were defeated 4-2 by France. His calm demeanour settled his fellow comrades’ nerves to record comeback wins against Denmark, Russia and England.

Rakitic described him as the leader they looked unto for inspiration in difficult periods, and the mundial was testament to that statement.

This led to him being named the best player of the tournament, ahead of an impressive Eden Hazard who took Belgium all the way before getting stifled by France, an opponent that stopped Croatia but could not stop Modric from his midfield duties.  All this he did despite some Croatia fans questioning his loyalty before the tournament due to a long-drawn case of perjury back home where he won the 2018 Football Oscar for Best Croatian Player- an award he has monopolised since 2013.

He was also named the best midfielder in Europe for 2018, named in the UCL team of the season, and has been a constant feature in the FIFA FIFPro World XI team since 2015.

A final- and most recent- testament that Real Madrid looks ordinary without his artistry was evident in August when the UCL holders were made to look like an average team by Atletico Madrid in the UEFA Super Cup in a 4-2 loss. Their midfield was bypassed and Real’s defence has always been a particularly shaky one when their midfield misses the artistry of Modric, despite the presence of pass master, Toni Kroos.

Real Madrid almost shipped Modric off to Inter Milan in the summer following the World Cup with his age coming to mind, however, new manager Julen Lopetegui has recognised the Croat’s importance to the team which struggled in the absence of Modric who was given an extended rest following his World Cup exertions.

It is no secret that the 10-year duopoly of Messi and Ronaldo snapping all individual awards had become tiresome, but nothing should be taken away from Modric’s latest triumph as the midfield genius for both club and country deserves the best award and continues to knit his teams together.