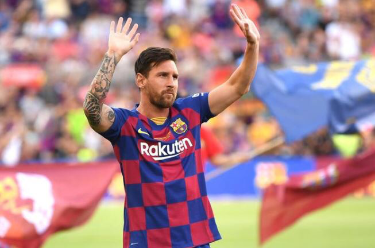 It was reported that Argentine international, Lionel Messi has officially left Barcelona, the club with whom he has spent his entire professional career.

This online news platform understands that Lionel Messi quit Barcelona after their contract dispute could not be resolved.

It was reported that Lionel Messi’s departure comes as one of the shocks of the summer, as a number of clubs will undoubtedly circle around one of the greatest players in history.

The Argentine’s departure was confirmed by FC Barcelona in a statement where it added that Lionel Messi “will not remain linked with the club” and effectively leave it after contract talks broke down.

Following news from MARCA that the Argentine was “further from renewing for Barcelona than ever” before, and claims made by Catalan radio station RAC1 that he Messi “does not like the current squad” and that the other captains have been informed of his stance, the Blaugrana sent out a press release to address the matter.

“Despite having an agreement reached between FC Barcelona and Leo Messi and with the clear intention of both parties to sign a new contract today, it will not be possible to formalize due to economic and structural obstacles (regulations of the Spanish League),” it began, translated from Catalan.

“Faced with this situation, Lionel Messi will not remain linked with FC Barcelona. Both sides deeply regret that in the end the wishes of both the player and the Club cannot be fulfilled.

“Barça would like to thank the player for his contribution to the expansion of the institution and wishes him the best in his personal and professional life.”

Messi breaks down in tears at Barcelona press conference (Video)