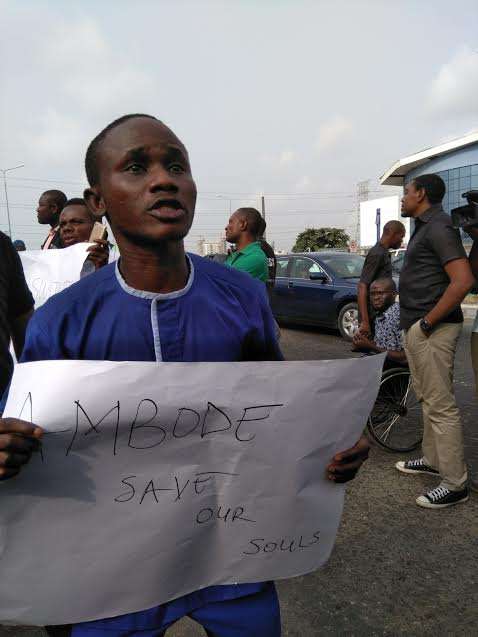 Street urchins popularly referred to as ‘Area Boys’ or ‘Agberos’ smashed phones, gadgets and cameras of protesters who had taken to the Lekki toll gates, Friday morning, to rail against new fares announced by the toll management this month.

It took the efforts of the police to restore calm and usher the miscreants away.

The protest is being organised by the Eti-Osa Development Forum which has spent the entire week mobilising support via whatsapp and other social media platforms.

The protesters are calling for a reversal of the new rates. 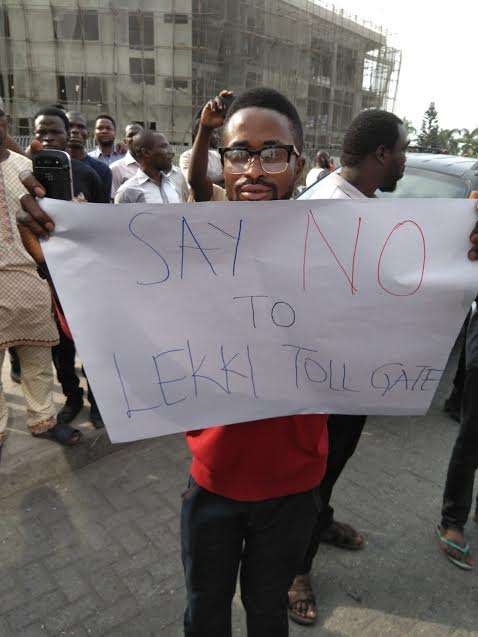 There is a massive police presence around the Lekki axis at the moment as protesters wield placards with different inscriptions like “Say No to Lekki toll hike”, “Switch off your ignition” among others.

Music of the late afro-beat legend, Fela Anikulapo Kuti is also blaring from a nearby truck.

The Lagos State police command had warned Lagosians to shelve the planned protest.

“It has come to the knowledge of the Lagos State Police Command that some residents of Lekki/Ajah areas of the state are planning to protest the increase in toll fare by the management of Lekki Toll Plaza”, a statement from the police had read.

“While the Command recognizes the right of citizens to carry out peaceful protest, the police will not standby and watch protesters take laws into their hands nor allow miscreants to hijack the protest.

“The Command is using this opportunity to inform and warn the group planning this protest for tomorrow, Friday, the 9th of February, 2018, not to block the Highway, the Expressway or any road for that matter.

“All those who want to participate in the protest must organize themselves in a peaceful manner in line with public protection and assembly law.

“The Command would not hesitate to use reasonable force to prevent any group of persons from blocking the road or breaching the public peace.

“The Command however, wishes to advise all to go about their lawful business peacefully on the Island and indeed every part of the state as adequate security is in place throughout the state”.

The protesters began assembling at 9am on Friday, February 9, 2018. More and more people are parking their cars on the roads leading to the tolls and joining the growing band of protesters.

“We call on his Excellency, Mr. Akinwunmi Ambode to intervene and proffer immediate panacea on the increased, excruciating fares”.

The Lekki Concession Company (LCC) which manages both tolls in highbrow Lagos, had initially planned on rolling out the new rates in November 2017; but public outrage would prompt the Lagos State government to ask the company to put that on hold pending the consultations with critical stakeholders.