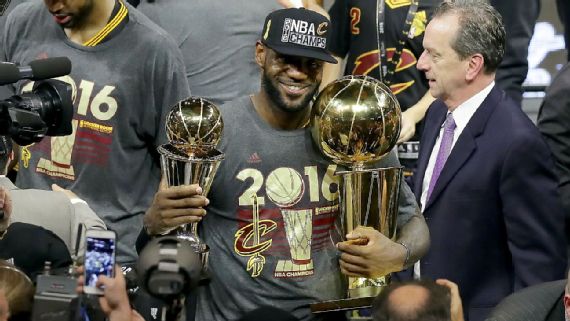 LeBron James was unanimously named MVP of the NBA Finals for the third time following the Cleveland Cavaliers‘ 93-89 win over theGolden State Warriors in Game 7 on Sunday.

Over the seven-game series, James averaged 29.7 points, 11.3 rebounds and 8.9 assists with an effective field goal percentage of 53.3. He became the third player to record a triple-double in Game 7 of the Finals, joining Jerry West in 1969 and James Worthy in 1988.

Later, Irving compared James to Ludwig van Beethoven: “I’m very thankful that I have a guy like that that’s leading our team that I can continue to learn from. And when my time does come of being able to lead a franchise and see the landscape of how it’s supposed to be composed, I watched Beethoven right now of LeBron James compose a game.

“He had a freakin’ triple-double in Game 7 of an NBA Finals game. There will still be naysayers, but I know it doesn’t matter to him. It doesn’t matter to me. All that matters is we’re champions, and our whole team is etched in history.”

James won consecutive Finals MVPs in 2012 and 2013, when he notched his first two titles with the Miami Heat. He returned to Cleveland as a free agent in July 2014. In addition to delivering the city its first major sports championship since 1964, James led the Cavs in becoming the first team in NBA history to rally from a 3-1 series deficit to win the Finals.

“I came back for a reason,” James said. “I came back to bring a championship to our city. I knew what I was capable of doing. I knew what I learned in the last couple years that I was gone, and I knew if I had to — when I came back — I knew I had the right ingredients and the right blueprint to help this franchise get back to a place that we’ve never been. That’s what it was all about.”

James punctuated his historic Finals performance with a dramatic final two minutes of Game 7. With the game tied 89-89, James pursued the reigning Finals MVP, Andre Iguodala, on a Warriors fast break and recorded one of his trademark “chasedown” blocks as he rejected Iguodala’s layup attempt.

LeBron James became the third player to record a triple-double in Game 7 of the NBA Finals, joining Jerry West in 1969 and James Worthy in 1988

Moments later, with the Cavaliers leading 92-89, James took a hard spill to the floor after being fouled by Draymond Green. He writhed in pain and held his right wrist before returning to his feet. Then he drained one of two foul shots to extend Cleveland’s lead to four with 10 seconds remaining.

“You see his basketball talent, the way he can control a game,” Cavaliers coach Tyronn Lue said. “But the reason why he deserves this is because he has a great heart … and great things happen to great people.”

James is now 4-2 all time in Game 7s and 2-0 when the ultimate game comes in the NBA Finals.

Related Topics:CavaliersLebron James
Up Next