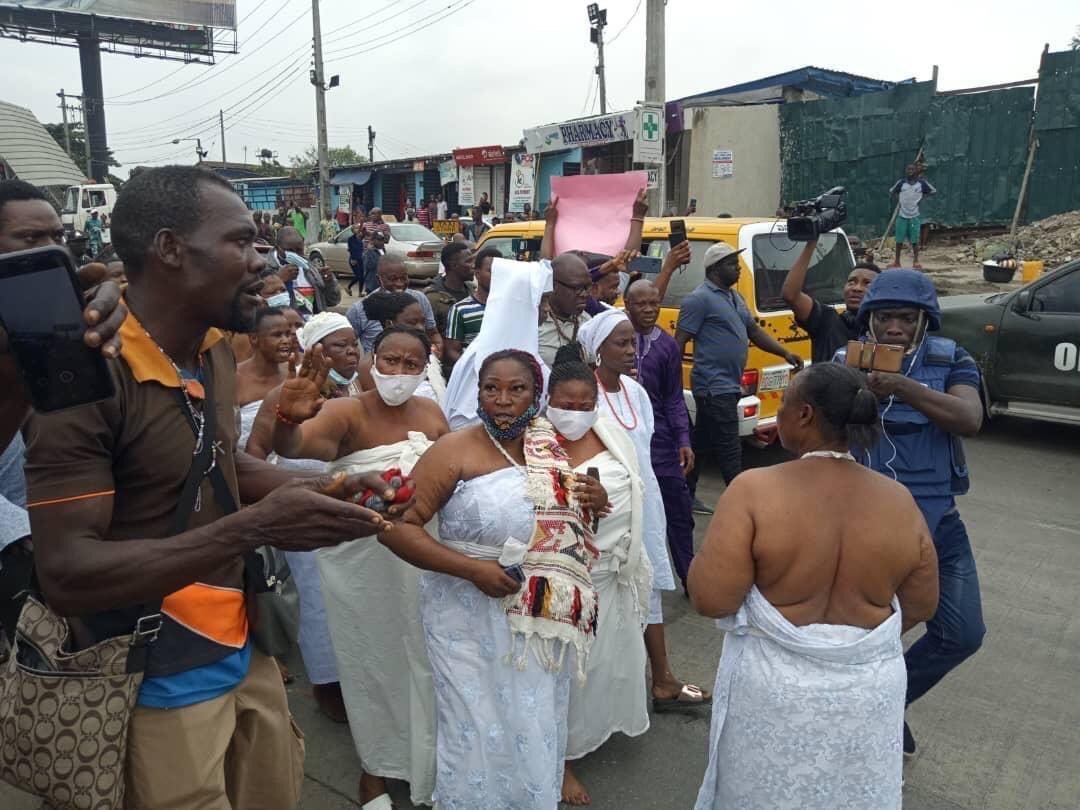 Forty-nine persons, among them a man who claimed to be leader of the Ogboni confraternity and a female Osun worshipper, simply identified as yeye, were arrested weekend, during the botched Yoruba Nation Mega rally at the Gani Fawehinmi Freedom Park, Ojota, Lagos.

The Police said dangerous weapons such as arms, ammunition, axes, cutlasses, and charms were recovered from them. Also recovered were five vehicles used to convey the protesters to the venue.

Some of the suspects were said to have come from outside Lagos. As at yesterday, owners of some of the vehicles impounded contacted the command from Oyo state, informing that the vehicle in question was leased to the arrested suspects.

Recall that the command handed down a warning last Thursday, that it would not allow the Yoruba Nation rally in the state under any guise, threatening to deal decisively with anyone or group that would act otherwise.

However, protesters who gathered at the designated point with different banners on Saturday to carry on with their agitation for a Yoruba nation, were dispersed by policemen stationed at Ojota.

Parading the suspects at the command headquarters, weekend, Commissioner of Police, Lagos State Police Command, CP Hakeem Odumosu,  said, “ On Saturday July 3, 2021, despite warnings and security explanations given to organizers of the rally to forestall breakdown of law and orders in Lagos State, certain individuals came into the state with the intention to foment trouble under the guise of the said mega rally. In curtailing their activities that portend threat to the security of the state, the command arrested 49 suspects.

Items recovered from them include one pump action rifle, two local made pistols, four live cartridges, one expended cartridge, and stickers with the inscription ‘Oodua Armed Forces ‘.

The Command boss further explained that around 11.10 pm same day, the Area Commander,’ H’ , Ogudu whose jurisdiction covers part of Ojota area of the state , got a tip off from a Lagosian with an undisclosed identity, that some objects suspected to be arms were abandoned behind a car stand , near King David Executive express, Ojota.

When the Area Commander proceeded to the place , Odumosu said, he  discovered one AK 47 rifle with (18 ) 7.62mm live ammunition , two locally made pistols with 15 live cartridges were recovered.

He stated further that  with these recoveries, especially the sticker with the inscription Oodua Armed Forces, it was glaring that the protesters had a sinister motive other than the rally , adding that information at the command disposal had it that their intention was to cause unrest in several parts of the state.

Odumosu said, “ Coupled with the conduct of the so-called agitators and others that despite repeated warnings from the command and the Lagos State government, trooped out for the planned rally, one could easily infer that they were not in Lagos state for a rally but for another mission geared towards destabilizing the state, if not nipped in the bud.

“These discoveries and recoveries have authenticated the intelligence report at the command’s disposal  and they have also vindicated the command for banning the rally in its press briefing of Thursday July 1,2021. But for the proactive security strategies emplaced by the command towards the botched rally, the entire state would been engulfed in crisis similar to the #EndSARS violence”

He, however,  clarified that as much as the Police respect and protect the rights of every citizen in the state, they would not fold their hands to allow any group of persons to truncate the peace being enjoyed in Lagos state using the guise of the Yoruba Nation rally.

The suspects, according to him, would be handed over to the State Criminal Investigation Department, SCID, Yaba, for discreet investigation and possible prosecution.

However, when one of the suspects who identified himself as leader of the Ogboni confraternity, Kabiyesi Tajudeen Olarewaju alias Ajamajebi denied participating in the rally.

According to him,” I am an  Ogboni king. We went for worship in Surulere on Friday night. I had more than 2000 followers that worshipped with me.  We started from 11pm on Friday, to Saturday to  5 am .

“I had to sleep because I was going to drive. By 10.30am on Saturday, we left Surulere for Ikorodu.  I was to pick one of my drivers at 7Up. As I alighted at Ojota, some policemen stopped me. When I introduced myself, they said I should go. But they stopped me again and arrested me. There were six people  inside  my jeep ”.

Asked if any weapon was found in his car , he shook his head”.