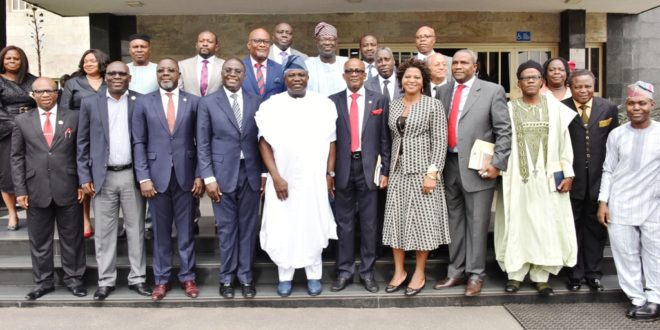 Lagos State Governor, Mr Akinwunmi Ambode has identified the importance of collaboration of key stakeholders to achieve the desired goal for sports administration and development in the country, saying funding of sports should not be the exclusive preserve of government.

Speaking at Lagos House in Alausa, Ikeja when he inaugurated the new boards of the Lagos State Sports Commission and the Lagos State Sports Trust Fund, Governor Ambode emphasized the need for the private sector to partner with the government to invest in sports development especially in training talents that abound in the country, as well as putting necessary infrastructures in place.

He said: “I want to reiterate our commitment to the Sports sector and the need for collaboration between the government and all sports stakeholders in the State.
“In achieving our vision in Sports, it is our belief that the funding of sports should not be the responsibility of Government alone. This informed the establishment of the Sports Trust Fund whose mandate is primarily to interface with the private and public sectors to raise funds for sports development.

Speaking further, the Governor said the inauguration of the new boards of both agencies was part of the grand plan of positioning Lagos as one of the top sports destinations in Africa, saying that the vision of his administration remained to make the State as the hub for sports, tourism and entertainment and leveraging on the interconnectivity within the three sectors.
While the Trust Fund is chaired by a former Lagos State Deputy Governor, Mr Femi Pedro, the Lagos State Sports Commission is to be headed by seasoned sports administrator, Dr Kweku Adedayo Tandoh.

Responding on behalf of the appointees, Pedro thanked Governor Ambode for the opportunity to serve the State, assuring that the members would deliver and perform far beyond expectations.