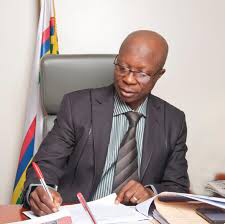 A member of the Lagos State House of Assembly, Hon Adebisi Yusuff on Thursday said that the rate at which drug abuse is prevalent among youth in the country called for urgent attention.

Yusuff said that failure of the society, including governments, parents, schools as well as other stakeholders to curb the trend would have catastrophic effects on the socio-economic development of the country.

The lawmaker gave the warning while addressing journalists during the 7th Annual Constituency Stakeholders’ Meeting at Private Ice Hall, Ayobo-Ipaja, Lagos on Thursday.

The annual event is usually held simultaneously across the 40 constituencies of the state.

This year’s event with the theme ‘Increasing Wave of Drug Abuse: A Threat to Nation Building,’ was attended by political leaders, religious leaders, royal fathers, CDAs, CDCs, artisans, pupils, members of national road union among others.

Yusuff who represents Alimosho constituency I in the House, explained that the theme was deliberately chosen since there was correlation between drug abuse and insecurity.

In his speech, which he read on behalf of the Speaker, Rt. Hon. Mudashiru Obasa, Yusuff told the constituents that “governments at various levels have been making efforts in addressing some of the problems associated with drug abuse and its danger to the nation’s youth.”

While disclosing that the matter had been a serious concern to the leadership of the House, he explained that “drug abuse in simple terms is the use of illicit drugs, prescription or over-the-counter drugs for wrong medical purposes.”

To demonstrate the extent to which the abuse of drugs had been so alarming, the lawmaker listed some notable drugs such as codeine, tranquilizers, psychotropic substances like ‘monkey tail,’ ‘skoochies,’ ‘revlon,’ ‘colorado,’ ‘542,’ among others.

Yusuff declared, “The use and abuse of drugs is fast becoming prevalent amongst adults and especially the youths.

“Drug abuse has been identified to have diverse and devastating effects on the safety and progress of the society.

“Apart from its negative effects such as violent crimes, distruption of the family, child abuse and neglect, as well as unemployment, it has been associated with some other criminal behaviours such as gang formations, cultism, armed robbery, rape and other social disturbances.

“There are also the economic and health effects such as loss of job, dropoing out of school, stealing, and complicated health issues such as persistent nausea, changes in appetite and weight loss, liver damage, seizures, stroke, mental confusion, memory loss and brain damage and lung disease.

“It is not far fetched to draw a similar conclusion between drug abuse and the vicious attack and wanton destruction of lives during the #EndSARS protest across the country in 2020 that left many properties worth billions of naira in ruins, particularly Lagos State,” he said.

A representative of the National Drug Law Enforcement Agency (NDLEA) , Dr Oluseyi Odewale reiterated at the event that drug abuse is a challenge to the country as a whole, saying many household substances are being converted to drugs to make the youth high.

Odewale who is also a guidance and counseling expert added, “there is no way you can control drug abuse without ontrrolling drug supply. Who are those supplying them? For every seven in our society, there is a drug abuser,” adding that the age bracket is between 15-64.

She then challenged parents to create time for their children and wards, adding that they needed to be captured very young before they reach adolescent age.