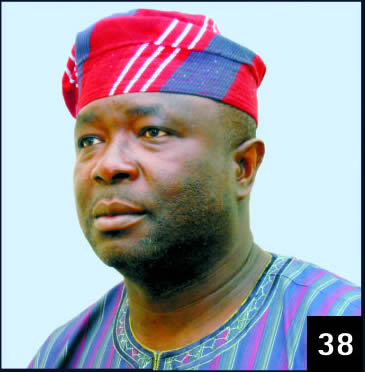 The Lagos East Senatorial candidate of the All Progressives Congress (APC), Hon. Sikiru Osinowo has promised to donate his entire salaries for four years to the district if he wins the 2019 general elections.

Osinowo, a fourth-term lawmaker in the Lagos State House of Assembly made the pledge at a Reconciliatory Stakeholders meeting organised by party leaders in the Lagos East Senatorial District on Thursday.

He added that apart from his salaries for four years, he would use the

office to bring more dividends of democracy to the people and organise welfare packages that would make life more meaningful for them.

commended leaders and members of the party for their support and commended his rivals in the party primaries.

“I am not the best, the most educated or intelligent, but everything was divinely planned. Other aspirants spent money, time and energy too.

“Where you are sending me, I am sure that all yours contributions and loyalties will be compensated”.

district, my salaries for four years would be donated to the party.

“Whatever the amount, it is for the party, I promise. You will determine how it will be shared.

“Our supporters and followers struggled and suffered inside sun and rain to make sure I win this election, you will know that they are worthy to be given more,’’ Osinowo said.

According to him, his choice to flag the party ticket came to the

National Leader of the party, Asiwaju Bola Ahmed Tinubu as a surprise, saying he never wanted him to contest for the seat, but that the leaders of the party insisted that he should.

Osinowo, who noted that the meeting was to reconcile all aggrieved

members said: “Compromise is key in getting things done very

“We don’t want to make it winner takes all. Those who contested with me are many. We want to reconcile everybody so that we will all work together and enjoy the dividends of democracy together.

`’Some of the aspirants stepped down, not that they are not qualified but because of the respect they have for the party, we are not going to let them down. We are trying as much as possible to reconcile all groups.’’

Osinowo, who specifically applauded Chief Lanre Rasak and Ambassador Olatokunbo Lawal and others for stepping down for him, assured that he would not disappoint the party and the leaders.

Also speaking, Chief Lanre Rasak, one of the GAC members, urged that party leaders in the district to be united and be more focused ahead of the 2019 elections and deliver huge votes for the ruling APC.

“After this meeting, we expect harmonious relationship among all the party members, we expect APC members to be more committed to the goals and aspirations of the party’s candidates to ensure victory,” he said.

Rasak added that the leadership of the APC in the district would give sense of belonging to all members, especially the aggrieved.

Alhaji Akanni Seriki, a member of the GAC from Epe, who warne

against disloyalty and any kind of betrayal, said that all party

faithfuls should be fairly rewarded, saying that all kinds of infighting should end.

Seriki urged Osinowo not to listen to rumours and divisive

words, while advising him not to forget the party faithfuls if he eventually emerges as the winner of the election.

Also Speaking, Hon. Tunde Braimoh, one of the APC leaders in the Lagos East Senatorial District and member representing Kosofe Constituency II in Lagos Assembly, said that the meeting was to re+engineer the party ahead of the 2019 elections.

Braimoh, who noted that since only one person could get a seat where many people indicated interest, there was a need to bring everybody together after the contest to move the party forward for the task ahead.

NEMA Expresses Shock Over Indictment By House of Representatives Committee