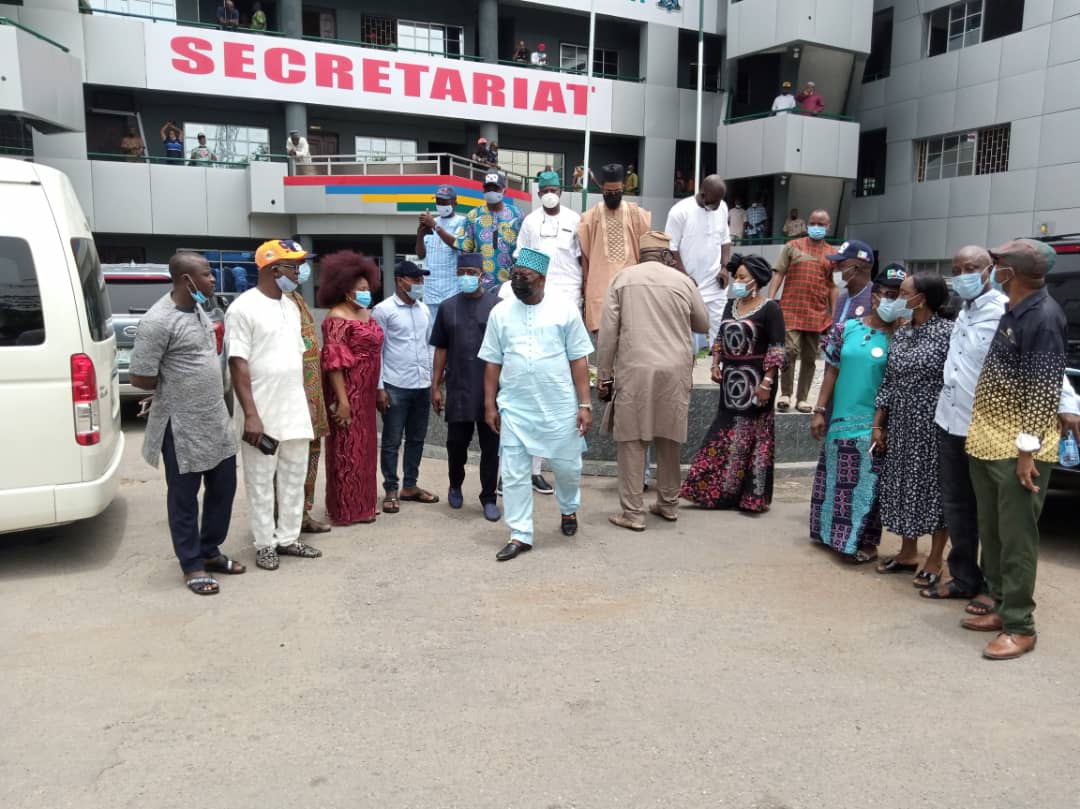 A member of the Lagos State House of Assembly, Hon. AdbulSobur Olawale has commended the Executive Chairman of Ajeromi Local Government, LG, Hon. Fatai Ayoola, management and Staff members for the resilience to rebuild the Secretariat that was destroyed during the aftermath of the ENDSARS protest.
Olawale, who is also the Chairman of the House Committee on Local Government and Community Relations, disclosed that the Secretariat was among those government facilities that were destroyed by hoodlums during the aftermath of the ENDSARS protest.

In the same view, the lawmaker applauded Council Chairman of Ifelodun Local Council Development Area, LCDA, Hon  Shaibu Ajidagba for building the legislative chamber during his tenure in office.

Speaking with journalists, after the oversight function to both Ajeromi Local Government, LG and Ifelodun Local Council Development Area, LCDA, Olawale reiterated that the function provides an avenue to interface with the local government, understand the relationship that exists between the workers and the management of the council.

According to him, workers are the engine room of any local government and we believe, it is important to feel their pulse to know the kind of relationship that exists between the workers and the management and intervene where there are challenges.

“The function is to also avail us the opportunity to assess the projects awarded to the local government between 2017 and 2020 and to know those that have been completed, on-going and those that are yet to be done. This is an opportunity for us to know how tax-payers’ money has been spent.

“We have visited Ifelodun Local Government Development Area and Ajeromi Local Government. At Ajeromi, what we meant was very encouraging. It is remarkable because we know what happened to the local government during the ENDSARS protests. It is worthy of emulation that the council could quickly rise up to rebuild the secretariat and I think that is commendable and the synergy that is existing between the management and workers is also commendable.

“At Ifelodun, we could see superlative performance. The Chairman of the Council has set a good legacy by building a legislative chamber in the local government.

“We are advising other local government chairmen to emulate this gesture because the essence of governance is to put a lasting legacy for others to fellow.

“We urge the local government chairmen to know that reward for a good job is more work. Those council chairmen should not relent in ensuring that projects are put in place”, he said.

Meanwhile, Executive Chairman Ajeromi/Ifelodun Local Government, Hon. Fatai Ayoola, applauded the members of the Committee for their visit to be able to assess the work on ground.

Ayoola lamented that the local government secretariat was destroyed and vehicles were vandalized during the aftermath of the ENDSARS protest but noted that with the help of the Lagos State Governor, Mr. Babjide Sanwo-Olu, the secretariat was rebuilt.

“Four months ago, October 20, 2020, Ajeromi/Ifelodun was attacked by hoodlums under the guise of ENDSARS protesters, 89 vehicles were destroyed and burnt but it takes the efforts of people, the political class to get the secretariat back.

“We have been passionate about development of the youths through our monthly grant of N100,000 to assist in entrepreneurship. We have also taken the security of the people into cognizance and in that regard; we have donated security vehicles to the police stations around us.

“We are also building the first sporting facility at the Maratana stadium and we have been doing to engage our youths to be the best in life.

“We have been able to showcase some of our on-going projects and I think, the judgment is the members of the Committee. We will continue to do our best as far as grassroots governance is concerned.

The Council Manager. Mrs. Mayowa Ikuforji, however said, the synergy that exists between the management and workers are cordial adding that the workers have been enjoying their welfare packages and as well as all entitlements that go with their respective offices and positions.

The Council Chairman, Ifelodun Local Council development Area, Hon. Shaibu Ajidagba, disclosed his administration has been able to complete some projects including building a comprehensive health centre which was commissioned by the Lagos State Governor, Mr. Babajide Sanwo-Olu.
“We have been able to positively influence the grassroots in the area of education, health care delivery, environment, infrastructure, welfare packages among others.

“We also built our legislative building as well as constructed roads within local government and its environs”, he said.

The Leader of the National union of Local Government Employee, NULGE, Comrade Paul Olumide, applauded the Council Chairman, for the welfare packages but urged that more vehicles should be procured for workers for easy movement to their respective destinations.

He also pleaded that all severance packages be paid before the end of their tenure.

Body of newborn recovered in Lagos