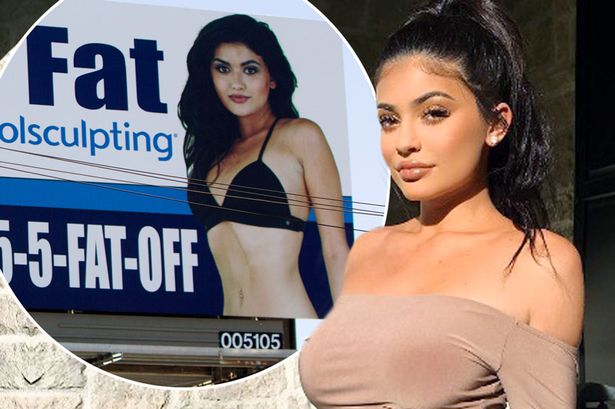 Kylie Jenner is reportedly unhappy with a ‘fat reduction’ company seemingly using her likeness to promote their product.

A billboard in Los Angels shows a woman – who looks VERY similar to the slim reality TV star – alongside an advert for Doctor Fat Off, which urges customers to use ‘Coolsculpting’ as “an innovate way to contour your body by freezing unwanted fat away”.

According to TMZ, Kylie has her legal team on the case trying to put an end to the campaign, which features a model lookalike and could convince fans of the teen that she has endorsed the brand.

It comes after Kylie’s BFF Jordyn Woods opened up on their friendship, and how they regularly go to each other for advice about boys and fashion, and are always honest with each other.

“It’s both of us giving each other fashion advice. Whenever one of us needs advice, she’s like, ‘Does this look better? Or should I wear this?’ We’re quite honest. I’d be like, ‘If it were me I’d change this or this would look better,'” Jordyn told Mirror Celebs.

While a lot of girls at 18 might lack the confidence to wear some of the outfits Jordyn and Kylie do, the model says because of her famous pals – she’s had to just “own it” herself too.

“Being this confident about my body happened over time, you know, just growing up,” Jordyn revealed.

“Especially in this circle, I’m kind of really forced to own who I am and stick to my guns, so over time I’ve just learned that your individuality is your best gift. Once I understood that I just thought, you know what? I’m going to own it (sic).”

The teen says there’s so much pressure to look a certain way now Instagram has taken over and people spend so much time editing their photos – but is that really their true beauty, she asks.

“You don’t know what’s real or not and you’re looking and thinking, ‘Wow, this girl is so beautiful,’ – but she definitely doesn’t look like that in person.”

While speaking about body-shaming after Kylie recently turned her Instagram comments off, Jordyn admits that she just tries to block the negativity out.

“The way I look at it is that this person is so insecure about their own lives that really what you have to do is spread love to them and if they were happy with themselves they wouldn’t be coming on your page.”

She says she hasn’t really experienced that much negativity herself, but does recall one instance where she was approached by a group of girls who were acting aggressively.

“I tend to block it out or accept it but there was one time when I was in New York when I had first gotten signed and I was walking down the street and a group of girls were yelling my name very aggressively so I didn’t turn around.

“They followed me into a store where I was just helping my friend work. They were like, ‘Oh this B-word got a job,’ and were taking photos of me and stuff. But I just let it slide. I ignore it. There’s no point.”