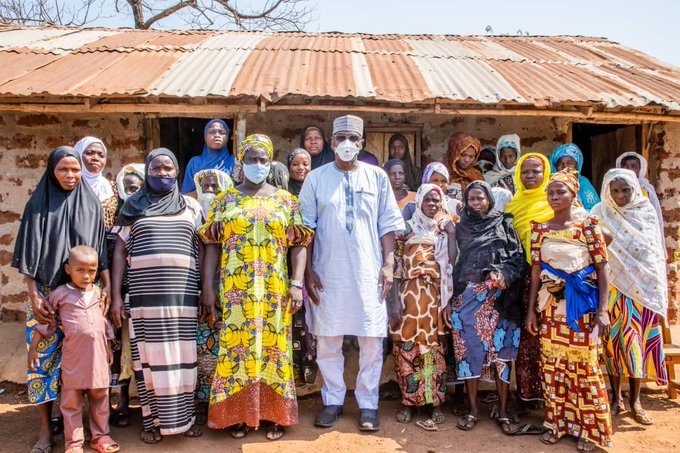 Following a report by the BBC on some women who contributed money to build schools for their children, Kwara State Governor Abdulrahman Abdulrazaq on Thursday visited the Nomadic LGEA Nursery and Primary School, Agindigbi, and St. Luke LGEA Primary School, Onila, near Agbamu, Irepodun local government.

During his visit, Gov. Abdulrazaq refunded the money so far spent on the ongoing construction of their communities’ schools.

The women said they were keeping a fraction of their share of the federal government’s conditional cash transfer since 2017 to build a school for their community.

“We are returning the money expended by these women who were instrumental to the construction of existing structures in the two schools. We are in these communities to ensure that these facilities are completed. We will also expand the school to ensure that the 60 pupils sharing a classroom becomes a thing of the past.

“I am very happy that the women have shown a lot of responsibility. It further shows that President Muhammadu Buhari is working. People seem to forget where we are coming from; the state of things when he took over and the challenges he met.

“President Muhammadu Buhari set up the Social Investment Programme as a social safety net which trickles down to villages like these. These villages have taken responsibility, rather than keeping the money for themselves alone, they used it for the benefit of the communities.

“Yes, government all over is having challenges in the area of education (infrastructure). But our administration is investing in education infrastructure.

”We are also recruiting the right teachers to ensure quality teaching. We are employing about 5000 teachers in the recruitment exercise going on.” AbdulRazaq announced during his visit to the communities on Thursday.

AbdulRazaq also promised to intervene in the provision of potable water, electricity and other amenities in the two communities.

The Village Head of Agindigbi Agbamu, Alhaji Okanlawon Adam, commended the governor for his interest in ensuring quality education for the children, describing the visit as the first in the history of the community.

“Women in this community contributed to build this. We need the support of the state government to build more classrooms and provide other amenities,” Adam said.

Motunrayo Sulaiman, one of the beneficiaries of the Federal government’s conditional cash transfer programme, said the women benefitting from the scheme in the community decided to contribute N2500 each from their monthly stipends to construct classrooms in the area.

“Your Excellency, we solicit your efforts to fix this school and provide teachers to guarantee the future of our children,” she said.

At St Luke LGEA Primary School, Onila, the only teacher in the school Mathew Ibiyeye said the structure which is at window level is being constructed by women within the community from their monthly conditional cash transfer of the federal government.

“The women contributed money to build up till this level and they do not have capacity to continue. We want the state government to continue the remaining construction. We have brilliant pupils and we want you to assist this community for the benefit of children. At the moment, we have 60 pupils,” she said.

A youth leader, Abolaji Sunday, also lamented the neglect of the community over the years and commended Governor Abdulrazaq for the visit and his interest to develop the hinterlands.