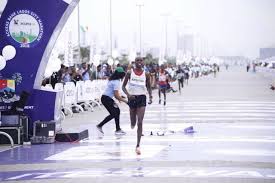 Kenyan-born French athlete Abraham Kiprotich, has emerged winner of the 2018 Access Bank Lagos City Marathon, in the 42 kilometer race after returning at time of 2 hours, 15 minutes and 04 seconds.

After the race, Kiprotich pocked the sum of  $50,000 prize for winning this year’s edition, thereby biting the 2 hours 16 minutes record set by Kenyan athlete Abraham Kiptum. In the women category, Ethiopian Herpha Guta won after completing the race in two hours and 38 minutes.

At the 2012 Summer Olympics, Kiprotich competed in the Men’s marathon but did not finish. He won the 10 km de Clermont Ferrand in a personal best time of 28:41 minutes. Ilya Pam wins the indigenous race with 2hours 27 minutes after finishing as the first Nigerian to pocket the N3 million prize money.

There are controversy in the 10 kilometer indigenous race for both male and female category, Adamu Shehu Muazu who was declared winner was later disqualified after it was confirmed by the organizer that the Plateau State athlete is a professional athlete.

Speaking after presentation of medals to the athletes, Lagos State Governor and chief host of the marathon, Mr. Akinwunmi Ambode the plan is to secure the gold label for the marathon in year 2020.

“Presently we secured the bronze label and we intend to achieve the gold label in next two years for the marathon. But we are tired of presenting trophies to the East Africans, we will continue in our quest to commit resources to training our Nigerian athletes for them to also win the marathon,” the governor stated.

Athlete who finished second in the 42 kilometer race went home with $40,000, third position pocketed $30,000, while athletes who finished in fourth and fifth positions respectively were awarded the sum of $20,000 and $10,000 respectively.