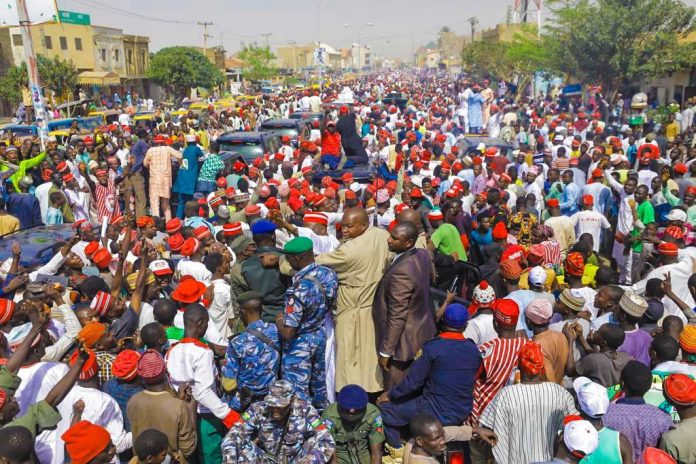 The general election is few days from now and the excitement is continuously building up, while the electioneering campaign would be officially stopped within days or hours from now.

Kano, in particular, been regarded as beehive and hotbed of northern politics, which is witnessing unfortunate milestone of retrogressive development.

Apart from incitements and negative rhetoric which is currently renting the air, blaring by the acclaimed political untouchables in Kano, there is resurgence of thugs, teeming youth whose mindset was fractured by political insensitivity, serving as safety escorts to political godfathers during rallies.

The two competing political gladiators, the ruling and the opposition parties are allegedly pinpoint for backing and facilitating the unbecoming trend of employing restive youth causing mayhem during rallies in the name of an electioneering campaign.

It is glaringly clear, during rallies, brandishing of party physical party logos, umbrella and twigs brooms are replaced by wielding dangerous weapons freely up in the air.

While snatching phones by the thugs, at a knife-point, whisking away belongings of commuters and innocents passerby, trapped amidst the procession are becoming worrying and extremely disturbing.

While the act of defacing opposition’s glossy billboards and posters by thugs on their way or back from rallies is nothing in comparison to senseless zeal to satisfy their masters.

Unarguably, these atrocities are reportedly happening in the presence of security operatives, reluctantly standing and timid to intervene in fear of adverse effect from the above.

Since from the commencement of political rallies to date, particularly in Kano, unreported thugs clashes were recorded, in which lives were lost, scores were injured, while some residences of political figures in Kano were recently torched and properties vandalised.

This was stem from the hate speeches and incitement from both parties untouchables, allegedly backing the banditry acts, who goes on air spelling the doom and ordering attacks on the opposition if the need arises, and allowed to go scot-free.

Even though, in every generality, there must an except, but it is hard to get a celebrated politician in the state who doesn’t have sternly-looking bandits, equipped with weapons that served as escorts in case of giving protection or attacking the opposition thugs, depending on the warranted situation.

The unfolding phenomenon in Kano has gone to the extent of craving the indulgence of Kano’s outspoken Emir Muhammad Sunusi II, calling on Kano politicians to reverse the ugly trend of banditry, while the newly- assumed State Commissioner of Police Muhammad Wakili observed with dismay and pronounced that political thuggery is a serious issue which should not be handled with kids glove in the state.

What holds for the future of teeming youth who deserved to be led through forthrightness instead, but dragging them astray to the life of illusion with no hope in sight?

A Stitch in time save nine

Nobody will unseat me, says Buhari