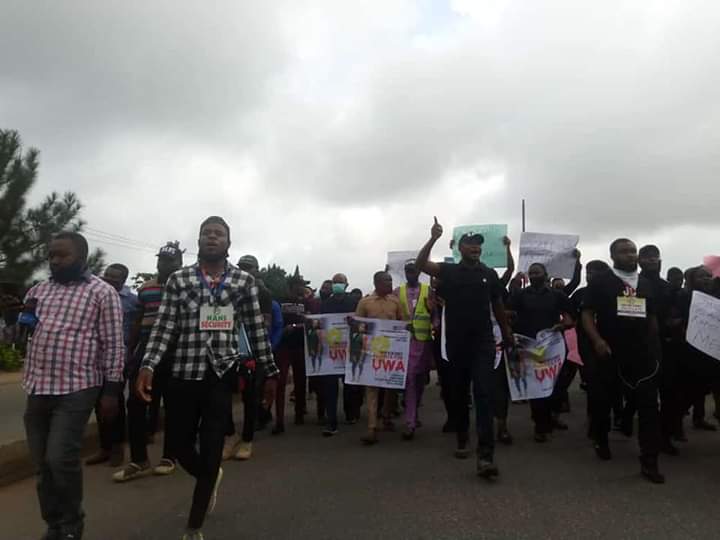 Hundreds of protesters, on Thursday, defiled the COVID-19 social distancing rules and currently protesting against the alleged rape and murder of Miss Vera Uwaila Omozuwa, a first-year Microbiology student of the University of Benin.

The protest is being led by the UNIBEN Students’ Union Government (SUG) and the National Association of Nigerian Students (NANS) led by the National President, Danielson Bamidele Akpan.

As early as 7am Thursday, the protesters in their numbers, converged at the front of the University of Benin maingate, Ugbowo campus, carrying placards preaching against gender-based violence; rape and murder.

A statement issued Wednesday by the UNIBEN SUG, had called on all students, SUG senators, NANS comrades, University comrades, and other concerned individuals “that wants justice for late Miss Vera Uwaila”, to join in the “peaceful demonstration” demanding justice for the deceased.

“We want to urge everyone, that it’s important we come out in our numbers. This is because we will be pushing for Justice for the deceased, and also that such a heinous crime like this should not repeat itself in the Institution, State, Nation and Globally,” the statement added.

It was reported that men of the Department of State Security Services (DSS) and the Nigerian police are on ground to cover security, amid the growing tension in Edo State occasioned by the upcoming governorship election.

House of reps rejects castration as punishment for rapists