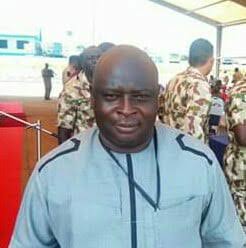 Babajide Otitoju, group controller at TVC News, and co-host of popular TV show, Journalist hangout, has released a statement addressing his purported involvement in the money inducement of some top editors by the Nigerian military in the wake of the recent terrorist attack, and claims that he had been actively demoralizing the troops via his comments.

Initially my intention was simply to ignore the post by Churcill Umoren on the dinner the Chief of Army staff hosted in Maiduguri during which he claimed the army chief gave each editor in attendance ?500,000. But friends have somehow prevailed on me to respond because my name was mentioned though the writer never exactly said I got the alleged 500k. He also said army spokesman, Brig Gen Sani Kukasheka Usman accused me of demoralising troops by my comments on social media and on Journalists Hangout. I will respond to the issues one after another.

First, I need to state here that I went to Maiduguri on my own and left on my own after one week. I had announced on the day my vacation began that I would be in the northeast to see our troops. It would not be my first time of going there on my own unaccompanied. I contacted the chief of air staff’s aides with a view to travelling with them as I did last year. As they were not ready when I was ready I told the airforce spokesman I could not wait for them. However, the chief of air staff ordered that as I had requested the air task force commander should let me go on two missions with the airforce.

I flew with the Nigerian spy aircraft and the Mi35. Since I was in town a friend of mine prevailed on me to attend the chief of air staff’s dinner and while i was yet to make up my mind the army spokesman met me in the hotel lobby and told me ” you’re the one every soldier wants to see.” .

I attended the dinner held in the same hotel where I lodged and at no time did the army chief say he was giving us money much less explain that it was not a bribe but simply for xmas. We asked him questions and we offered suggestions like patriots who genuinely want the war to end.

I disappeared afterwards into my room. I didn’t receive 500k from anyone and I don’t know who got what. The army spokesman never accused me of demoralising troops. Gen Usman knows I can’t be intimidated so he couldn’t have said that to me. We have mutual respect for each other. He and Gen Buratai merely asked us to support the army and see the war as a war against Nigeria. These days I don’t attend media assignments. I would rather send my junior colleagues. Even if it’s a briefing by EFCC. Indeed the inter ministerial brIefing of editors that Aso Rock invites me to, I stopped attending since 2016. It is to avoid this kind of silly stories.

I know how easy it is for one’s good name to be destroyed. So I am doing my best to protect mine. Nobody can buy my conscience, not the army, nobody. Veteran journalist Alhaji Danladi Bako once called me and warned me to keep my name desperately. “You are the most feared journalist in our country. You’re the mouthpiece of the masses. There will be all kinds of temptations. If you go down so many of our people will be disappointed in you,” he said.

I promise to retain my integrity quotient. I don’t have a choice. Thank you friends for reading and happy new year.