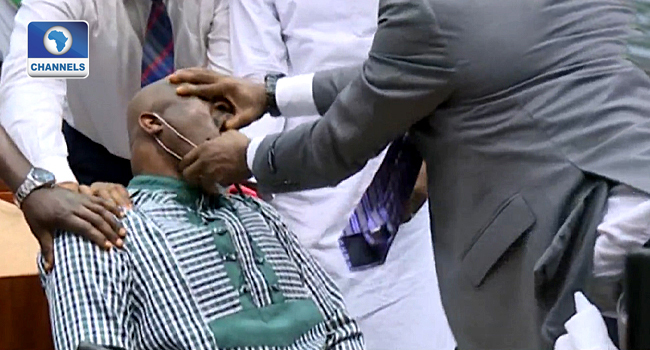 Kemebradikumo Pondei, acting managing director of the Niger Delta Development Commission (NDDC), has described as ridiculous, the claims that he deliberately passed out during a session of the house of representatives committee probing the commission.

On July 20, Pondei collapsed while answering questions from the panel probing alleged mismanagement of N40 billion by the interim management committee of the NDDC.

Many Nigerians, especially on social media, had said Pondei pretended so as to avoid being held accountable by the lawmakers.

Taunting him, the Peoples Democratic Party (PDP) had said Pondei fainted because of the weight of corruption under the current administration.

But in an interview with Vanguard, Pondei denied staging the act, saying that he does not run away from issues.

“I had an unexplained, unexpected health challenge. It is ridiculous to think that people believed I was acting. I would not pray for anyone to experience what I went through. I do not run from issues. I have put all that behind me,” he said.

The NDDC acting managing director also described the allegations against the commission as “laughable”.

“From N40 billion missing, the probes now became extra-budgetary spending. After accusing the EIMC of embezzlement of N40 billion, nothing was substantiated. The IMC is then asked to refund monies paid for historical debts owed contractors, service providers and allowances paid to staff,” he said.

“Payment/non-payment of these contracts contributed to the face-off and the lawmakers were denying ever doing contracts associated with the NDDC.”

Pondei admitted that there is lack of checks and balances in the regional commission, adding that “NDDC was a place for political patronage and raising war chests for elections”.

“We are told that the lawmakers actually facilitated the projects to their constituencies, but also insisted on the contracts been awarded to them or their proxies,” he said.

“I am not part of any cartel. Instead, I have tried to eliminate this by reducing interaction between staff and contractors. Gratification had been going on as a routine procedure. Nepotism in processing of files and payments also exist. Before all these distractions, the EIMC was working seriously on this issue of people being asked to pay percentages to staff.

“In between the probes by the NASS, we tried to present the 2019 budget performance and defend the 2020 budget. A minor typographical error was noticed and we asked for 10 minutes to amend the errors, but the presentation was stepped down. The NASS has since gone on recess.”

Obasanjo: Carrington offered me asylum before Abacha arrested me